Proposal for Creative Writing Competition as a partnership project between the Rugby Arts Steering Group (Leeds Rugby Foundation) and the Headingley LitFest.


As part of its future programme, the Rugby Arts Steering Group has earmarked a creative writing competition as a possible event to be organised in the 2009 season*. The intention was to promote a creative writing competition among the fans and general rugby constituency, which might feature children’s and adult categories and be open to submissions in poetry, short story , short film script, or a personal account / reminiscence on the theme of rugby.

While details have not been finalised the competition could concern both rugby codes and the two clubs, Leeds Rhinos and Leeds Carnegie. It was also envisaged that this proposal would facilitate some education / community work around creative writing, particularly given the facilities and experience of the Leeds Rugby Foundation’s educational work and also given that the Director of Leeds Arts Forms (Education Leeds) is a member of the Rugby Arts Steering Group.

Given the further development of the Headingley LitFest and its plans for a second event during the spring of 2009, there is an obvious opportunity for a cooperative partnership among the Rugby Arts Steering Group, the Leeds Rugby Foundation and the Headingley LitFest to incorporate the Rugby Creative Writing Competition into the festival, with mutual benefit.

Promoted as part of the Headingley LitFest, the work of the Rugby Arts Steering Group would have greater reach and contact with the local area and community, while the HLF would have the opportunity to reach the many thousands of people that are associated with Leeds Rugby and its activities. There is also potential opportunity for greater publicity and marketing for the festival through the involvement of the marketing and PR arm of Leeds Rugby. The close partnership association between Leeds Metropolitan University and Leeds Rugby would also potentially enable the project to reach out to many of the local Leeds student population. The possibility of using the stadium as a venue for some of the festival’s events is also seen as a potential benefit to both organisations.

It is proposed that initial discussion should take place involving Richard Wilcocks (Representative HLF), Doug Sandle (Chair LRASG) and Chris Rostron, (Manager of the Leeds Rugby Foundation), and then formal proposals discussed by the respective committees.

*Successful projects so far have been commissioning the composer Carl Davis to create a (7 minute) orchestral anthem to the Leeds Rhinos (Hold On), sponsored by Leeds Met, which has been recorded by the Orchestra of Opera North, a one year artist in residence project supported by the Arts Council of England, Yorkshire, and the ongoing commissioning and production of a contemporary dance to the music of Hold On.

Below, Doug Sandle (photo by James Heartfield) at a Leeds Met symposium: 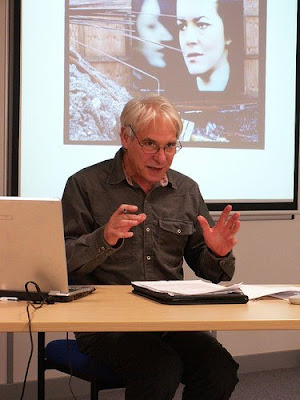 Posted by Richard Wilcocks at Wednesday, May 28, 2008 No comments:

Put it in your diary

Don't forget the meeting next Tuesday (20 May) from 7.30pm at the New Headingley Club in St Michael's Road. It will be an informal mingle rather than a meeting, beginning in the bar area.

Your suggestions, comments and involvement will be welcome. Use the email on the right as well, clearly marking your message LITFEST so that it is not deleted along with all those spammers who have secret bank accounts in Nigeria.