We were charmed and entertained

Tea with Beryl Bainbridge was on Saturday 28 March. Framed photographs of battleships and Royal Navy reunions were behind her on the wall of the long meeting room at the back of the New Headingley Club, which was until a few years ago owned by the British Legion. In front of her was a large audience expecting to be charmed and entertained. It was. We loved her! At one end of the room, a selection of her novels had been spread along the top of a table All were later sold.

Introduced by Richard Wilcocks, who had invited her to Headingley after a conversation during a visit to the Brontë Parsonage in Haworth, she spoke about her early career as an actress at Liverpool Rep, about her influences, about recent illness, about recurring themes, and about death, which was the subject of an essay to be broadcast on Radio 3 a few days later. This can be heard by clicking here.

She made special mention of According to Queenie and her view of Dr Samuel Johnson, of The Dressmaker and the repressive atmosphere during the War, and of The Bottle Factory Outing, but the main part of the talk was taken up by a reading from the manuscript of The Girl in the Polka Dot dress, which has yet to be completed. After a short explanation about the background (who was the widely reported, untraced young woman seen in the pantry of the Ambassador Hotel in which Bobby Kennedy was assassinated by Sirhan Sirhan in 1968?) we heard the story of Harold and Rose, who are travelling through the States in search of a sinister Dr Wheeler. They end up in Los Angeles on the night of the assassination. Rose is wearing her favourite dress – the polka dot one.

Questions afterwards were well fielded, and a queue of admirers formed for the book signing. A major event!

In conversations later on, after the main audience had departed, she expressed great interest in the Victorian aspects of Leeds, of which there are many, of course, especially the streets of red-brick houses and two of the buildings in the city centre designed by Cuthbert Brodrick - Leeds Town Hall and the Corn Exchange.

Here is an extract from her July 2010 Guardian obituary:   She did not read modern fiction, only "anything from Graham Greene backwards". Her discipline as a writer was intense. Each novel emerged from a few months in which she wrote through the nights, smoked a lot, slept and ate little. She constantly read aloud what she had produced, to get "the music of the prose" right, and in an alchemical process of cutting and perfecting, she would distil every dozen or so draft pages into one sheet without a single wasted word.

James Nash is the perfect compere for poetry sessions. He gave the audience in the Dare Café cellar (in this case, largely made up of people wanting to read their work) just enough of his own excellent fare and then turned things over to the other producers, handling them with cordiality and diplomacy, making sure that nobody went on for too long. He always had a positive word or two up his sleeve, especially for first-timers. There's nothing as frightening as spouting your treasured verse for the first time in front of your fellows!
Posted by Richard Wilcocks at Friday, April 03, 2009 No comments:

Love and beauty are the conventional topics of many of Shakespeare’s sonnets, along with related topics of time and mutability. He is not conventional in his treatments, though – he addresses the poems of love and praise not to a fair young maid, but to a young man, and includes a secondary subject of passion – a woman whose beauty and virtue is questionable: love is represented in a complex and paradoxical way. Over many years, commentators have speculated about the claim in the sonnets that the poet will make the young man’s beauty immortal in verse, thereby defying the destructiveness of time, and about the theme of betrayal of friendship.

What is the nature of the relationship between the poet (or rather, the persona of the poet which Shakespeare adopts) and the young man? Some commentators claim that the relationship is asexual while others contend that it is sexual. The ambiguous eroticism is a constant source of fascination, not least for Paul Priest, the author of Sonnets, two performances of which by Theatre of the Dales closed the LitFest this year. They were followed by a lively discussion with the audience.

Paul Priest taught at Trinity and All Saints College in Horsforth, and during his time there introduced a number of innovatory practices to increase the students' level of engagement with Shakespeare. These included bringing in theatre practitioners like David Robertson, and he was the actor who played a most convincing, if a little ageing Shakespeare last weekend at the Yorkshire College of Music and Drama. Gemma Head oozed authority as Lady Pembroke, and Will Tristram played her son William as an irritating teenage aristo who was perhaps justifiably upset at being described as a churl. The wordmaster had to explain the use of the term in his dedicated sonnet, rather weakly in this script, I thought. Katharina, 'a dark lady' (Victoria Morris) was suitably alluring in a slightly mannered performance full of appropriately slinky movements, a turn-on indeed for WS. John Savage brought an intelligent flamboyance to the character of Henry Wriothsley, Earl of Southampton and the author himself came in to play the part of a divine dressed in a blue Anglican cassock to comment on the religious slant adopted by WS towards the end of the series.

Theatre of the Dales is locally famous for all the right reasons, it appears.

Below, the man responsible: 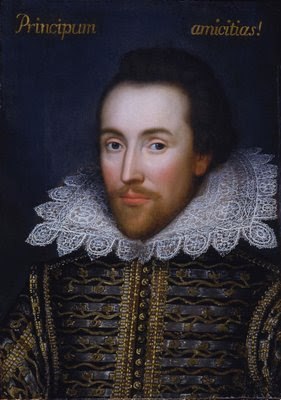 Posted by Richard Wilcocks at Friday, April 03, 2009 No comments: