Good to see you

Good to see Cadaverine on Woodhouse Moor today, which is Unity Day. A large area was covered with marquees and stalls, music boomed through canvas, several thousand people milled around, many with children, and dogs were much in evidence, possibly because there was a dog show, at which most of the beasts seemed to win red first prize rosettes. Throwaway barbecues were not in evidence this year.

Arts Council funded Cadaverine, which is for under twenty-fives in theory, should be making some kind of showing next March in the fourth Headingley LitFest. Its efficiently organised 'Talk Tent' today was popular and strangely earnest and sober...

Check this Guardian article for a feature on Cadaverine which includes an interview with its founder, Wes Brown.

Below, Becky Cherriman reading her poetry: 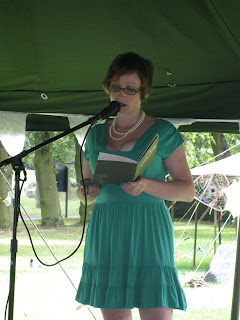