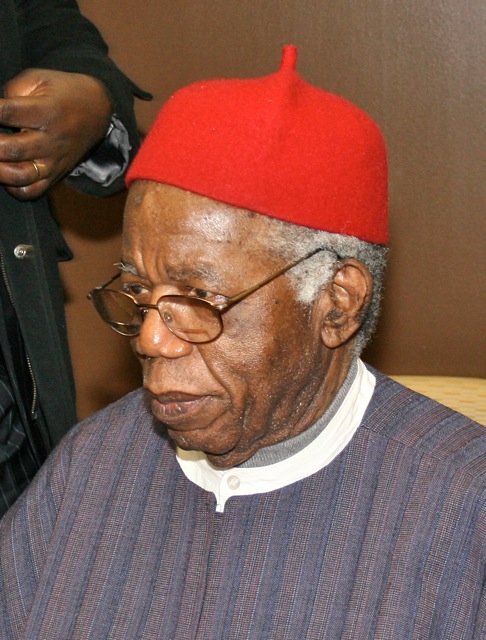 Richard Wilcocks writes:
It was not part of our LitFest, but a few of the people - mainly students of course - packed into the Rupert Beckett Lecture Theatre yesterday evening could be counted as known LitFest supporters, and the university could be described as being on the edge of Headingley...

It was unforgettable.  There was the great man himself, Professor Chinua Achebe, "the father of modern African writing", reading some of his poems to a rapt and highly reverent audience in a quiet, slightly quavering voice. Many had brought with them copies of his books. Generations all over the world have studied Things Fall Apart. He was introduced by Professor Martin Banham, who remembered his last visit to Leeds 46 years ago as part of a celebration of Commonwealth literature and who stressed how lucky we all were because Leeds was one of only two places where Chinua Achebe would read as part of his visit to Britain.

Amongst the poems was Vultures, probably the best-known, not least because it is in the AQA Anthology for GCSE English Literature in the Poetry from Other Cultures section - see this BBC website and listen to a reading accompanied by a slideshow. It was deeply moving to hear this disturbing poem from the poet's own mouth, at last.

Nelson Mandela's name was mentioned afterwards by a colleague in the audience who had first read Things Fall Apart in Uganda, and there is a definite link. Mandela read Achebe's work while incarcerated on Robben Island, and commented later that he was a man "in whose company the prison walls fell down".
Posted by Richard Wilcocks at Tuesday, November 23, 2010 1 comment: