Herbert Read is well-known to teachers, at least to art teachers, or should be. His Art and Society, first published before the War and on all good educational reading lists ever since (I hope and trust) is strong on the need for art in education, and on the virtues of simplicity, which conveys a feeling of truthfulness.

Moon’s Farm is simple, or appears to be at first, like a freshly-raked Zen garden. It was written for the Third Programme in 1955, and is described as A Dialogue for Three Voices, which on 27 March at the Yorkshire College of Music and Drama were those of Maggie Mash, David Robertson and Murray Edscer, who moved about with scripts in hand, looking… chilled, in the old sense, with hoods up, wearing sensible clothing, the sort that would keep the Yorkshire breezes out, the sort that reminds us that Read came from a line of Yeoman farmers. Theatre of the Dales (in association with Trio Literati) made sure that the atmosphere was coolly meditative, hypnotically beautiful.

David Robertson said he was delighted to work with T Lit again, because he has helped on the production side of many of their shows. He’s a pretty versatile performer, with plenty more than Voice 2 in Moon’s Farm on his programme list. TV credits include Emmerdale, Heartbeat, Cold Feet, Coronation Street and Waterloo Road, and in 2008 as King Duncan in Tim Albery’s production of Verdi’s Macbeth with Opera North.

Earlier in the evening, we heard him with Maggie Mash in 84 Charing Cross Road, the twenty year correspondence between Helene Hanff and Frank Doel. He had deftly pruned it and he sensitively read it. Maggie Mash once again reminded us that she does accents superbly, on this occasion an accent from the northern part of the United States. Difficult! They so often get us wrong (think Dick Van Dyke) and vice versa, but she sounded like the genuine article, and I should know, with a daughter-in-law from transatlantic parts. Maggie, appropriately, sounded a little prissy, and the Fifties attitudes were well conveyed by both actors.

The selection of recently discovered letters which preceded the two main courses of the evening was an excellent starter, well prepared by the chef, again David Robertson.

After the show, Herbert Read’s son Ben, a denizen of Headingley and Senior Lecturer in Art History at the University,  addressed the audience, replying to a few of my questions and providing the last voice of this year's LitFest. Issues were clarified, but mysteries remained: how, for example, could a man describing himself as an anarchist receive a knighthood from Sir Winston Churchill? The coffee beans stopped arriving, said Ben, when this happened. They had previously been regularly dispatched to Yorkshire from Soho, sent by a group of Sicilians. They were anarchists, and upset. 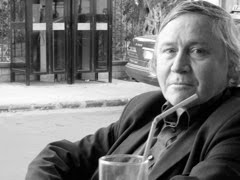 Posted by Richard Wilcocks at Tuesday, May 11, 2010 No comments: