An Evening with Luigi Pirandello 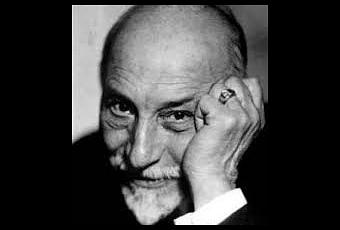 Following the sell-out success of ‘Dinner with Montalbano’ last year, Headingley LitFest in partnership with Salvo's offers diners an entertaining evening with the great Sicilian novelist and dramatist Luigi Pirandello, whose plays include ‘Six Characters in Search of an Author’ and 'Henry IV'.

Simone Lomartire and Richard Wilcocks will present and perform extracts from his works, script-in-hand, mainly in English but with a sprinkling of Italian as well. Dishes served for the dinner will, of course, be in the Sicilian tradition.

Posted by Richard Wilcocks at Saturday, March 30, 2019 No comments:

Poet Kirsty Taylor has now completed her series of workshops at Ralph Thoresby School in Holt Park.  The group of young poets, who name themselves 'Rebel Writers', have been filmed by Joshua Lewis of Big Dumb Music performing their best pieces of work.  Once the final video has been edited and set to music, it will be uploaded on to the school website.  Watch this space. 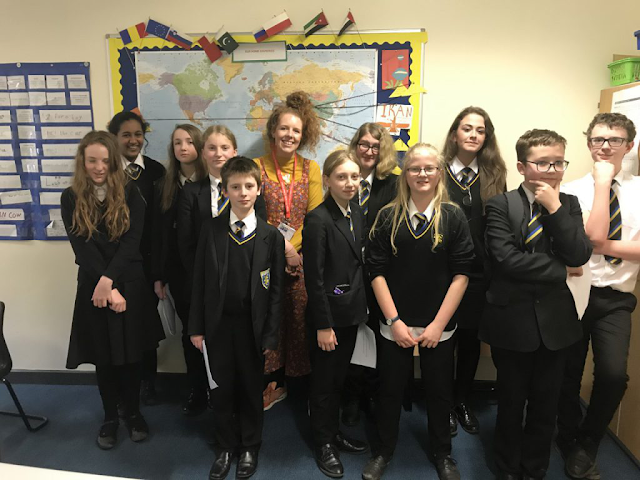 Comments from the young poets that stay with you:
“I'm not usually very good but this has expanded my writing skills”
“You can write about gritty things here”
“You can write from your heart”
“It's really good having Kirsty here, having a professional poet”
“What we write can be experimental, it's not marked”
“This helps with my confidence for the future”
“This stuff helps with actual life”

Posted by Richard Wilcocks at Thursday, March 28, 2019 No comments:


It was about mothers and other loved ones in the family, but it began with hands. After reading one of her own short poems, about a dream of a cat, Malika distributed and read out a poem by Lisa Suhair Majaj - 'I Remember My Father's Hands'. The class (Year 6) drew hands 'of someone you love'. Malika talked with the class about some of the things that mothers commonly say to sons and daughters. Hands shot up. They say plenty, and not all of it telling off. 'This is all a trick!' said Malika, 'because I'm gathering ingredients for a poem, like in a recipe.' The hands were soon being filled with the sayings of the loved one.

More and more ingredients were added, including similes. Your mum or dad is strong? Like what? A rock, a brick, a boxer, a weight in the gym, a house... the suggestions flooded in. Her hands are soft like what? A pillow, a marshmallow...  and so on. What do those hands do? They stir soup, knead bread, form chapatis, open doors, pull the cords of blinds...  and so on. 'This is turning into a list poem,' said Malika.

On finale day, the class had the poems ready, thanks to class teacher Julia Rawlinson, all now in best handwriting, and they were taken into the hall for a rehearsal, for performance later on to any parents who could make it. Malika coached them. It was all about building confidence, encouragement with 'well done' for all. Voices had to be raised, projected: 'I know you've got a bigger voice than that! What's the voice you use in the playground? Let's hear it!' And keep still when you're waiting your turn - no rustling of paper.' Loosening-up exercises followed.

It was mainly mothers who came, the subjects of most of the poems. Everybody read beautifully. Most of the audience cried with happiness. 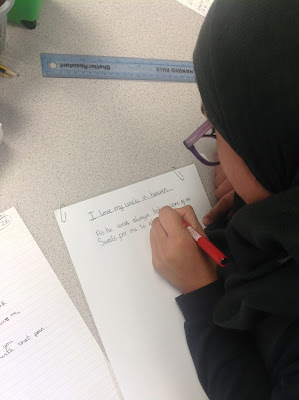 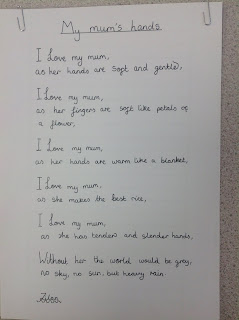 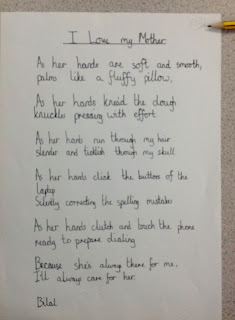 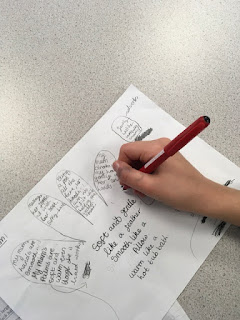 Posted by Richard Wilcocks at Wednesday, March 20, 2019 No comments:

Year 5 at Weetwood Primary school shared their poetry today with classmates and parents.  Poet James Nash introduced the sharing session explaining how the children’s writing was based on Walter de la Mare’s narrative poem ‘The Listeners’  where the young people had been invited to write from the perspective of the phantoms in the house.

Year 5 had answered questions  in the first person as if they were the listeners, the ghostly presence,  in the old house. From there they had taken their initial ideas to a first or second drafts of a poem [ in one case five drafts] and then were all ready to share their finished pieces.

Class teacher Joanne Parker was hugely impressed at her class’s creativity, imaginative use of language and  growth in confidence over the three sessions the young people worked with James.

The children themselves really enjoyed the experience.  Among their comments they said they liked:

‘creating my own poem’,
'going for a second draft’,
'writing a mysterious poem’,
‘listening to James talking about being a poet’.

Standout lines were many, and included,

‘our sobs endlessly running for war’

‘I can taste nothing but thin air’

‘Spiders and ticks find a home in their carcase’

‘My friends and family left when I caught death’.

Posted by Richard Wilcocks at Wednesday, March 20, 2019 No comments: