Headingley has still got a library, but no real bookshop since Bookz closed down a few years ago (no offence, Oxfam Books...) so it is wonderful to be attended upon by the excellent Radish bookshop, which is situated far from the delights of God's Own Suburb in the alternative universe of Chapel Allerton. The Alan Bennett freebies which we were given by the World Book people arrived there, along with several cardboard boxes containing other titles. Apparently, Nigel Slater's Toast is popular in those parts.

Prominently displayed near the checkout desk this afternoon was The Battersea Park Road To Enlightenment, by Isabel Losada, who will be speaking/performing at the Headingley Heart Centre on Wednesday 16 March on How to get published, and who intends to sign copies of her best-seller not only at the event but also the following morning at Radish.

Remember Bookz? It was piled high with cheapo and remaindered tomes, but there was also plenty of good stuff. Pity it foundered. All the more reason to have a LitFest in the area. Let's fly the flag!

Below, Sally Thums at Radish: 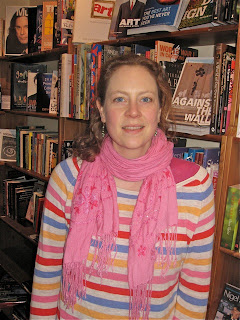 When the Wind Changed

The excellent Leeds-based Theatre Company BlahBlahBlah  took part in the second Headingley LitFest in 2009, premiering their show When the Wind Changed to delighted parents and children in the library. It's still going strong:

Throughout March the Blahs will be spending a day at a time in schools across Yorkshire, performing When the Wind Changed four times in the morning for Reception children, each performance lasting half an hour. In the afternoon they will do two performances of their show Max for Yr 1 / Yr 2 children, each show lasting forty-five minutes.
When the Wind Changed is a story about a girl whose face gets stuck by the wind when it changes. All manner of people's faces have been stuck by this mysterious wind. When Gran realises that wiping that look off her granddaughter's face isn't going to work, her only advice is to "wait for the wind to change again". They wait... and they wait... and they wait. And then the wind begins to blow...
Max is based on the Maurice Sendak picture book Where the Wild Things Are. Max has been up to mischief and is sent to his room without any supper. We sit with the children around a blank canvas which becomes Max's bedroom that turns into a forest. They travel with him in and out of weeks to Where the Wild Things Are. The children meet Wild Things seven times bigger than themselves and must help Max find ways to tame them without hurting them.
If you can make it, you are invited to dip into the day and see the participatory work in action. Visitor places are limited to three a day. You can book your place by contacting Cas Bulmer on 0113 274 0030 or at cas@blahs.co.uk. Please give plenty of notice so that the necessary arrangements with the schools can be made. 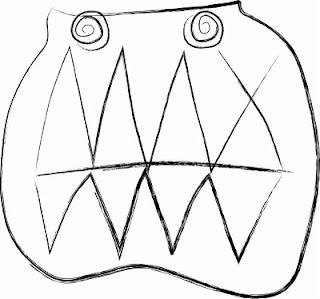 Posted by Richard Wilcocks at Friday, February 18, 2011 No comments:

For fun and profit? Depressed by rejection slips? Fed up with being a would-be? You could come in with the tide - read this - or you could cheer yourself up on Wednesday 16 March when Isabel Losada addresses us in the Claremont Room at Heart. See the programme. More on Isabel later.
Posted by Richard Wilcocks at Wednesday, February 09, 2011 2 comments:

Our part in World Book Night

Headingley LitFest has been chosen by World Book Night to receive forty-eight free copies of Alan Bennett's A Life Like Other People's. These will be delivered about a fortnight before the LitFest starts, and as we have just received the news, we have yet to decide the mechanics of distribution. The official World Book Night is on Saturday 5 March.
Alan Bennett is, just in case you don't know, one of our local literary heroes, who attended the school which is now known as Lawnswood, and who lived over his father's butcher's shop opposite the Three Horseshoes pub, now known as Royale Dry Cleaning.
Lesley McDowell wrote in the Independent in May:
Alan Bennett's memoir of his parents' marriage and his mother's battles with depression is clear-eyed, touching, occasionally waspish, not always charitable, and ever honest. The discovery in later life that his maternal grandfather committed suicide is, he tells us, the kind of thing a writer longs for, to spice up a dull, normal family story. But, of course, no family is ever really dull or normal, and no family is ever "like other people's", however much one might strive for it to be so.
You can read the rest by clicking here.
Reviews from anyone else are welcome. 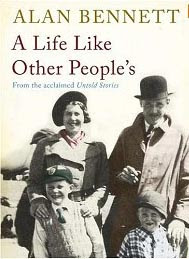