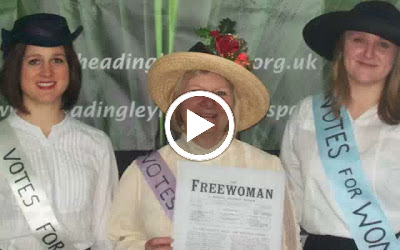 Thanks to the generous support from the Arts Council and the Co-operative Community Fund, Headingley LitFest was able to host its first major event specifically targeting young people in our community with a wide-ranging programme of events.

We started with a well-attended especially commissioned performance of ‘The Woodhouse New Woman’ by Theatre of the Dales, first performed at the main LitFest in March.  Focussing on Mary Gawthorpe, local suffragist, it both entertains and informs as it follows her journey from dutiful daughter into radical politics.  It is expected to tour to local schools in the autumn.

A creative writing workshop – to find your inner poet – was a delightful couple of hours in the company of James Nash, local published poet, assisted by Ruth Middleton from the Headingley Writers Group, run by the WEA at Heart.  Although a small audience, the quality of work produced was high – and the young people have given us ideas about how to recruit more of them in the future.  That’s what pilots are for!  As one participant said, “I brought my daughter to this event, and ended up participating myself!  It was a fabulous experience for my daughter, who has shown promise in her writing, and reads avidly, but is reticent about making her voice heard publicly. The session was skilfully and sensitively run.  Excellent.”

The film We Are Poets was again shown to a healthy audience that was both moved and uplifted by the story of six young Leeds poets, none with an easy backstory, who go off to an international ‘slam’ in Washington called Brave New Voices.  And get to the semi-final.  Beating forty other teams. But as Alex Ramseher-Bache, director, in the informative Q&A session afterwards, said “Points aren’t the aim; the point is the poetry.”  And it was – affecting, engaging, emotional.  For more information, check out We Are Poets.  Watch out for it on DVD soon.

Finally, Alex Rushfirth put together a great evening of local young musicians playing their own songs and poems to their original music.  As Seas-of-Green sang,
‘We're mutually in harmony/ all programmed by a man with a pocket full of pens’
Le Servo de Spock backed this up with some very original numbers where the music was definitely only illustrating the poetry. A shame we had to call time at 10.30 pm!

Were we happy with the programme of events?  Yes.  It would have been better to have had more young people involved, but we have learned a lot from this pilot, and will take the ideas from our contributors and audiences to our next venture for young people.

Posted by Richard Wilcocks at Friday, July 05, 2013 No comments: