The Lion, the Witch and the Wardrobe - Through the Portal

In the light of the weather forecast for more light snow, I had expected to start this with the famous quote from the book, 'It was always winter but never Christmas.'   However, we were treated to bright sunlight streaming through the school hall windows on to the beaming faces of class 5.  Ms Blackstone's pupils were well rehearsed and up to the challenge of performing individual lines, or the whole thing, to a large room full of supportive and enthusiastic classes, parents, school staff and visitors.  No mean feat when you're only nine or ten.

Year 5 were studying the classic book by C S Lewis from the Chronicles of Narnia; local published author and poet James Nash took the theme of travelling through a wardrobe but instead through a portal to somewhere unexpected.  What would you find? Sense? Expect?  What could happen? From writing a myriad of ideas down, the young people shaped their ideas and words, learning new ones along the way.  (Who knew 'stanza' at that age?  They do now). They then set to writing their own accounts of their imaginary experiences, some frightening, some delightful, all  vivid.

As headteacher Rebecca Pettman said, “Having a Distinguished Visitor, a Proper Published Author, work with us is such a fantastic opportunity to encourage our youngsters to write and perform their own work.  I'm flabbergasted by the vocabulary they have used, and the confidence with which they stand in front of the packed hall to perform their work.”  As Corrie Blackstone, Year 5 class teacher, added, “ this gives individuals the freedom to express themselves in a context of their own choosing.  It builds on 'I Can!', not 'I Can't.”

For one young man this was the first time he had attempted to write a whole piece without help in all his time in the class.  And for another young lady with the disturbed background and English as a Second Language that many refugees have, her writing had developed by two years to stun and delight her teacher.

Thanks again to the funding from Inner North West area management committee for supporting this work.  Thanks, too, to Headingley LitFest volunteer Rachel Harkess, who had assisted with the workshops in the classroom.

Some of the lines the children wrote:
I'm running, running and running

I hear squeaky noises in the distance, my blood runs cold

There is no sky or sun, where am I?

I s[un around on the chair
Thinking what to do for work,
As soon as I blinked I was teleported to a fair.

I travelled through a window and saw a treasure chest

I see stones around me, cut grass

All I can do is cry and panic

I was frightened by myself, without my brothers and sisters

I want to go home

And what had the children thought of the opportunity to write poetry in this way?
Poems don't have to rhyme!
How to get your ideas down first
How to edit and redraft
It helps your conscience grow
It's inspiring for other pupils
Reading your poem out

Posted by Richard Wilcocks at Thursday, February 27, 2020 No comments:

Conrad Beck writes:
Doug Sandle's new play, The Post Ram Tod Dynasty, refurbished from a radio play he wrote ages ago and which - mysteriously - was never broadcast, was given two brilliantly entertaining performances in the intimate but chilly (the heating was off) setting of the Meanwood Institute on Sunday 16 February.  The meaning of the odd title became clear in the opening five minutes: it is nearly an anagram of Tom Stoppard, the name of the famous playwright, in tandem with the word Dynasty. Cal, a playwright, is sitting at his desk wrestling with writer's block and scraping around for ideas, in the course of which he invokes the names of the likes of Stoppard, but to no avail, because he is interrupted first by his wife Ros, and then by their friends Linda and George. Perhaps they can help with what Cal describes as 'one of my existential fantasies'.

Cal (played by Doug Sandle in the afternoon and by Dave Robertson in the evening) seems to be stranded in Egypt, where the Professor Tompkin who has just popped into his head is in search of treasure. The waspish Linda (a beautifully nuanced performance from Jane Oakshott) suggests he bases his characters on the weather forecast and the determinedly placid Ros (a professional touch here from Maggie Mash) comes out with a frightening true story of when she was sitting in a train near a man who told her he was a psycho. George, who resents too much drama in his life (played by the intensely dramatic Murray Edscer) is taunted and pushed to the limits, because he cannot make out whether or not Cal is reading from a script. The atmosphere is almost calm, though, and they drink invisible whisky from a visible bottle, which Cal pours making glugging noises. We laugh. They are four credible characters in search of an author, perhaps, unlike the professor and Hilda, his nubile assistant in Cal's imagination, who could be extras in Murder on the Nile.

The atmosphere changes, first of all when George is made to answer questions about his childhood fears and phobias. Spiders are mentioned, ingredients in Doug Sandle's previous play last year. George storms out, soon followed by peace-making Ros. Alone with Cal, Linda declares her love to him, to his great embarrassment, and gets into quite a state. Cal can handle Hilda, but not her. Tremulous to begin with, Linda becomes extremely distraught. She locks herself in the bathroom, which along with everything else is behind a tiny screen in the corner of the tiny stage. All very dramatic, and when Ros returns with an apologetic George, to be joined by a back-to-normal Linda, it is time for the bourgeois delights of tea and sustainable olives accompanied by a delightful chunk of local cheddar. Soon, everybody is in tune with everybody else and Cal is back with the prof, still musing on the connections between real life and histrionic versions of it. It is a comedy after all.

While eating chocolate cake afterwards, members of the audience were wondering whether Doug Sandle has got any more radio plays stuffed into his bottom drawers. Let's hope he has.

Posted by Richard Wilcocks at Sunday, February 16, 2020 No comments: 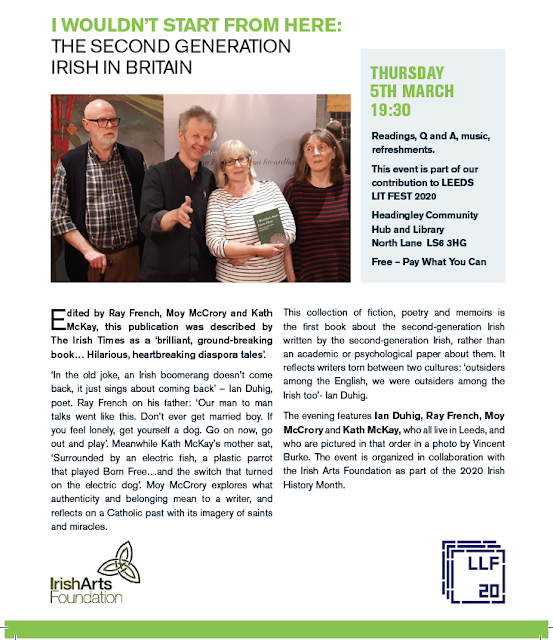 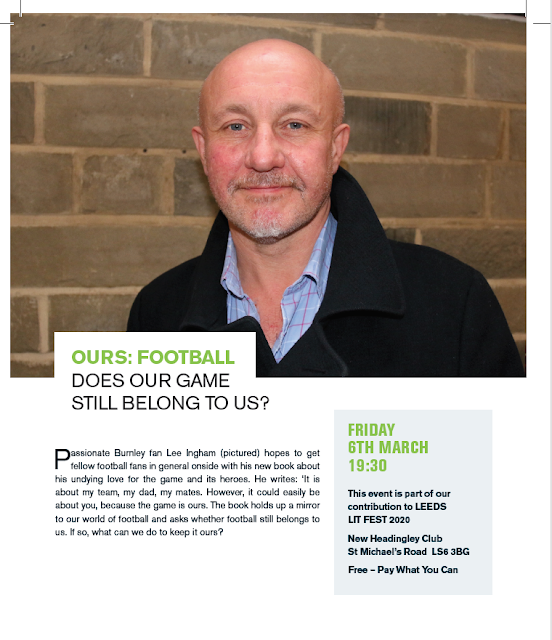 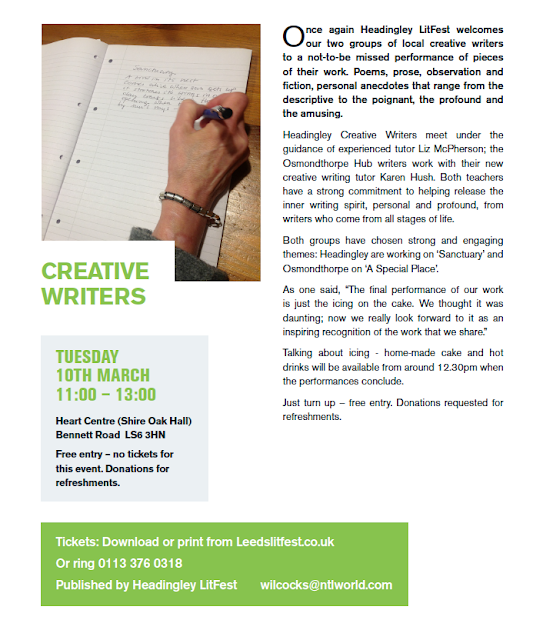 Posted by Richard Wilcocks at Tuesday, February 11, 2020 No comments: