Under the banner of Headingley LitFest, I have now been taking Malika Booker to Brudenell Primary School annually since 2016, with 2020 missed out because of a certain pandemic. In previous years, her sessions were spread over three weeks, with a performance to the whole school in the third, but this year there were a few complications, and her three sessions had to be in the same week. In addition, the class teacher who had been such a great help in 2019, Tom Nutman, was on compassionate leave due to a bereavement. Even so, everything has been a roaring success. Help and encouragement came with Emma Hargreaves, a trainee teacher just about to qualify who is destined to go far. The class is Year 5, which means it is made up of nine and ten-year-olds.

Malika began by reading a couple of her own poems, one about a little boy lost in a maze (she was once poet in residence at Hampton Court) and one about a cat that had to be dismissed from a household. ‘How long does it take to write a poem?’ asked a boy afterwards.

‘I always draft and redraft a poem until I think it’s finished,’ Malika told him. ‘That could take a week. One of my poems took eleven years. We’ll soon be doing lots of redrafting.’

‘A poem is made up of truth, with a little bit of lie and some exaggeration, like in a story.’ She mentioned the story she is currently writing for under-fives, ‘Mangolina’, about a girl who finds her lost carnival wings.

Then she introduced a method she has used before – ‘writing is like cooking’ – and the children were soon making their personal collections of ingredients, all around the chosen theme of Rivers. ‘Wind in the Willows’ has been on their curriculum since May. After explaining what onomatopoeia is, sounds made by running and rushing water were chosen, and after explaining the meaning of ‘personification’, various creatures were chosen to represent an ever-changing watercourse, with plenty of snakes to begin with.

More inspiration came in the form of ‘The River’, a poem by Caribbean poet Valerie Bloom, which begins:

The River’s a wanderer,

A nomad, a tramp,

He never chooses one place

To set up his camp.

This was read aloud, then, after asking a few questions, Malika finished with, 'We’ll write list poems. I’ll come to that tomorrow.’

‘Let’s have some good similes. What does your water do?’ Almost all hands shot up, imaginations fermenting quickly, responses including ‘my water bellows like a red deer’ and ‘the water is like a train, fast and furious’.

‘What about doing words, verbs? What does water do?’ It dances, leaps, trickles, attacks, manoeuvres amongst the suggestions. ‘And if we’re thinking about personification (remember yesterday?) what else can it do?’ It might whisper, or talk, or sing, or spit, or scream, or all of those. 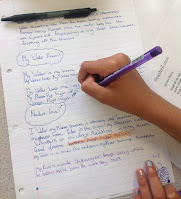 ‘Let’s have more nouns, names of things connected with your river.’ An alligator, a magical creature, a ghost, a falcon, a cheetah, a sloth, pebbles, seaweed and an assassin were some of the items to select from the ingredients list.

Moods? Anger was popular. ‘So what does anger feel like? Is it feathers brushing against your forehead? Or is it red hot coals burning in your eyes?’

Writing the drafts of the poem began. It had to be a list, with each item a couple of lines long, beginning with ‘The river is…’

Most of the session was spent writing, with Malika circulating amongst the tables, sometimes issuing reminders of what had been done during the previous two days. Towards the end, she spent time creating a background soundscape to go with a future performance, with each table allocated a watery sound (shhhh, fizzzz, plop for example) to practise. This would be a background against which each poem would be read.

Sadly, the performance in an assembly can only take place in a couple of weeks’ time, but Emma Hargreaves will pick up from this point and act as the producer. Some of their finished poems will be added soon, probably within the next fortnight.

Posted by Richard Wilcocks at Friday, June 11, 2021 No comments: 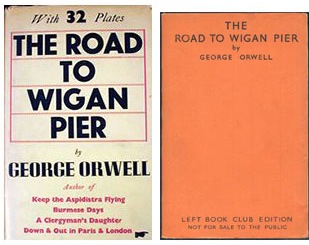 In 1936 George Orwell (Eric Blair) stayed briefly in a house on Estcourt Avenue, Headingley, visiting his sister Marjorie, who was married to Humphrey Dakin. He had spent much of the year traveling around the north of England, researching and documenting the widespread working class poverty of the time.  In Leeds, he made final adjustments to his notes, and 'The Road to Wigan Pier' was published the following year.

In the first week of March, 2022, we intend to hold an event with a theme based on the book which will begin with a walk from Estcourt Avenue to the Heart Centre. Local actor and jazz trumpeter Jem Dobbs  (Bassa Bassa, Des the Miner) will begin the walk by talking about his memories of the house, where he was born and grew up. The speakers at Heart have not been finalised, but the focus will be on the book and on the modern resonances which it creates. Hopefully, there will be other Orwell-related events as well.

Why not read the book now so that you are well prepared?

Posted by Richard Wilcocks at Sunday, June 06, 2021 No comments: