A staunch friend of the LitFest, Robert Barnard, died last week in the Grove Court Nursing Home on Cardigan Road. He spoke on the Brontës and on crime fiction for us, very entertainingly and without using notes, and apologised for not being able to make it to any of the events during the last two or three years because of his rapidly deteriorating health. He was a professor, a scholar, a great opera lover and an award-winning author as well as a personal friend, who will be greatly missed. (Richard Wilcocks) 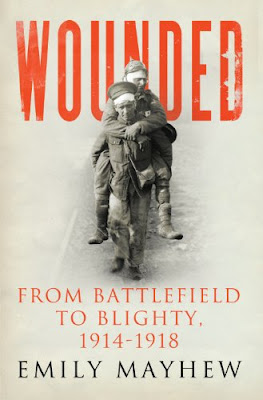 Wounded is a homage to the heroic men and women who cared for the wounded in the Great War, described by her as “an undiscovered, somehow silenced group”. Using a remarkable collection of letters and diaries, and rooted in wide reading and original research, Emily Mayhew has produced a startlingly vivid and engaging account of the way the wounded (almost every other British soldier could expect to become a casualty) were rescued, treated and cared for by bearers, Regimental Medical Officers, surgeons, nurses, VADs, orderlies, chaplains, ambulance drivers and others during a conflagration which was sparked by a symbolic act of terrorism in Sarajevo, rolled on like a mad machine for four years, and which led to the crumbling away of empires and the destruction of countless lives. A modern conflict.


The military medical services hardly knew what had hit them at first, just like the British Expeditionary Force itself, which was nearly wiped out at Mons and the Marne in 1914. Veteran nurses and doctors were at the front at that time, possibly with Boer War experience, but dealing with ghastly shrapnel wounds on a large scale was very different to dealing with relatively straightforward bullet holes on the warm, dry South African veldt. In Flanders, the fields tended to be wet and heavily manured, and most of the tetanus and gas gangrene cases which resulted from just slight scratches as well as mangled limbs were destined to die horribly.  The up-to-date cylindro-conical bullets were fast, hit hard and took tiny fragments of dirty uniform and other contaminants deep into bodies. The medics learned as fast as they could, and coped with almost impossible situations over and over again, a fact made clear through a collection of true stories about the ones who were there.

Take the story of Regimental Medical Officer William Kelsey Fry of the Royal Welch Fusiliers, who, after heavy losses taking a small town from the Germans, went out onto the battlefield himself to retrieve casualties.  “Time after time he cleaned the mud off his glasses, braced himself and joined the fighting soldiers, oblivious to all but the cries of the man he was trying to find in the middle of the chaos. When he found him, Kelsey Fry hoisted him up onto his back and ran as fast as he could. During one of these trips, he was shot in both legs. The wounds weren’t serious, but he was lucky to make it back to the medical post with his patient.” It was his duty to look after the water supply as well, making sure it was fresh, and supervised the digging of latrines. His reputation for unflappability and efficiency caused the upper ranks of the Royal Army Medical Corps to offer him a promotion away from the dirt and gunfire of the front line, but he preferred to stay. During a battle in 1916 he had so little time that a proper medical post could not be set up, so with his bearers he dug a hole as deep as time and the enemy would allow and put a tarpaulin over it, “It filled with casualties almost immediately, like rain collecting in a puddle. As in every aid post on the line, they worked so hard that they stopped hearing the shellfire and didn’t notice as it crept closer and closer…” Siegfried Sassoon, who knew him well, was one of many who was shocked when he heard of his death.

Or the story of surgeon Norman Pritchard, who found himself responsible for  a ward of recently captured German prisoners. “When Pritchard first set eyes on them, in their special ward, he almost turned round and walked out again. The POWs were in a dreadful state. Most had been hiding for days, lying in abandoned trenches and shell holes, hoping that their side would retake the ground. They were fetid with infections and starved, many of them on the brink of death. It was difficult to know where to start. Pritchard had no German, and so a kind, firm tone would have to do…”

Or the story of Nurse Winifred Kenyon, who “never considered going anywhere else but a casualty clearing station. She wanted to be as close to the war as possible, to share in the adventure and excitement and to make her contribution”… “Perhaps the most unexpected thing Kenyon learned inside the ward tents was how much was left up to the nurses themselves. There were several wards that they ran without doctors, and they taught their new skills to the new arrivals like Kenyon. ‘Resus’ was one of them. The men were too weak to raise their heads, let alone be operated on, and it was the nurses who brought them back from the brink. Kenyon learned to administer the magic mixtures of hot saline, brandy and coffee, and that you could never have too many hot water bottles. Sometimes you put ten or twelve around a man close to death from hypothermia and gradually watched him come back to life. Men came in grey and went back pink.”

Or the story of Nurse Morgan, whose home was the No 3 Ambulance Train, 300 yards long, with a supposed maximum capacity of 440 and equipped with iron stands and straps where cots or stretchers were hung. “During the Somme offensive the pushload of 440 or more became the norm, as No 3 struggled to keep up. Carefully planned entraining and detraining routines simply went to pieces in the face of the sheer numbers of casualties at the railheads, and within a week of the Somme the whole system of transit simply broke down”… “Morgan tried to calm her patients, while all around them they could hear the moaning of men in agony, the train an island in a sea of human desolation.”

Most of the material in Wounded is new, from previously unused archival sources, and it is presented not in a cold, detached way, but with genuine warmth and engagement, because Mayhew has the skills of a novelist, the ability to empathise, to stand in the shoes of those who were so committed to saving lives a century ago. The reader is invited to engage with the senses, to smell the gas still clinging to the uniforms of those arriving at London’s Victoria Station on ambulance trains, to recoil from appalling injuries, to gasp at the madness of it all.

UPDATE - website for published book Stories from the War Hospital is at www.firstworldwarhospital.co.uk