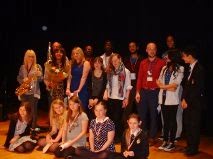 Thursday 8 May saw the culmination of the work in poetry workshops led by Michelle Scally Clarke at an evening poetry ‘slam’ for the newly-formed poetry group called 'Own Your Words'.  City of Leeds young poets were also invited to share in a second opportunity to perform, a really good development in our on-going poetry support work now with nine local schools.

Supported by funding from Arts@Leeds and Wade’s Charity, this new partnership has generated a lot of interest.  As Ralph Thoresby’s headteacher Will Carr commented: “..our newly formed poetry group gave a stunning performance as part of Headingley Litfest. Some extraordinarily mature poetry from a relatively young group of students.”

Support came from Sai Murray, performance poet/coach as well as Brendan Duffy on the saxophone and Junior Willocks on keyboards.  Young people, some initially shy, were encouraged to go up on stage with poetry they had written about their own lives, feelings, experiences.  Many adults would be terrified at that!

Pupils’ comments, both on stage and in the audience, include:

"The event really improved my confidence and made feel talented."

"It was great fun performing and even better getting to watch the others perform."

“Fantastic! Really good and very proud of my friends!!!!! AMAZING!!!”

.. and a parent was keen to let us know that it was
“Very enjoyable, so impressed with the talent and enthusiasm of the staff and pupils of Ralph Thoresby and City of Leeds school. Brilliant.”

Michelle firmly believes, as does LitFest, that:
“Spoken word has a great impact with the students - it is a great way to begin creative writing and free writing; it allows you to speak to the page, it allows your voice to be owned and heard, it allows for writing and literature and language to be enjoyed first then learnt. It allows for praise and for people to see the truth of you. These pupils humble and inspire me with their stories, poems and songs and I have no doubt that all will continue to perform, write and grow.”

Perhaps the final comment on the work should go to Tom Stubbs, the organising teacher at Ralph Thoresby:  “For me, I would just like to say that this whole event has helped some of the most cripplingly-shy students realise that they have a voice and that people want to listen to them.  It has opened other members of staff's eyes to new approaches to the teaching of writing and I would love to be involved in some form again in the future.”

We hope so too.
Posted by Richard Wilcocks at Wednesday, May 28, 2014 No comments:

Poppies, red and white, have become potent symbols and in this event (chaired by Richard Wilcocks) they provoked a wide ranging discussion on the themes of war and pacifism:
·       Is war valid?
·       Is war inevitable?
·       What is pacifism?
·       Is being a pacifist the same as being anti war?
·       What significance does pacifism have in the current world and domestic political climate?
·       What can we do?

Sylvia Boyes started the evening by exploring the origins and meanings of red and white poppies and she freely and frankly shared her own pacifist convictions with us. She explained how red poppies were originally sold by women in Northern France as a means of raising money and how their use gradually spread. Today they are still used as a fundraising device for ex-servicemen and their families (this later provoked a discussion on how poorly this country has always looked after its ex-servicemen and women) but in her view they are now being increasingly surrounded by militarism and because of that she feels she can no longer wear both a red and white poppy as she once did.

She explained how the Co-operative Women's Guild made and sold white poppies in 1933 before its wider adoption and promulgation by the Peace Pledge Union. The white poppy is a symbol of peace and the search for an alternative to war and was never intended as an insult to those who died in the First World War - a war in which many of the white poppy supporters lost husbands, brothers, sons and lovers - but as a challenge to the continuing drive to war.

Movingly, Sylvia said she would willingly remember the soldiers at the cenotaph but without the military paraphernalia.

Ingrid Sharp explored the anti war movement in Germany, both before and during WW1, revealing how a robust movement pre-war (comprised of groups such as the Social Democratic Party of Germany (SDP), German Women’s groups and other Christian and pacifist groups), changed once the war, which was presented as necessary to defend the German way of life, started. This was because of determined censorship and because, once war was declared, people and political parties (the SDP was one of them) then focussed on supporting the war effort. However some anti war efforts did continue, often via international connections (e.g. the International Congress of Women at The Hague in 1915) but its voice remained small. There was also no provision for conscientious objectors although there was some unofficial tolerance of those who wanted to undertake non-combatant roles.  It was interesting to hear the German perspective and this was re-enforced during the discussion by a German member of the audience who explained how in Germany remembrance (which mainly concerns WW2 and the holocaust) is focussed on peace.

In the ensuing discussion opinions ranged from those who said that ‘sometimes you have to fight for something’ to those who saw pacifism as the only rational way forward. The discussion was passionate, respectful and wide ranging and it was a privilege to take part. The audience comments below speak for themselves.

2.     Both speakers gave very interesting presentations. The first speaker concentrated with personal fervor on her campaign for the selling of white poppies, arising partly from her Quaker convictions. Ingrid sharp from Leeds Univ. gave a detailed account of WW1 as it was seen in Germany, where ideas of ‘pacifist resistance’ were taboo. The short lectures then promoted an intense discussion among members of the audience, many of whom had deep personal views on WWI and war in general. An excellent start to the new Festival of Ideas (and fine closing event for the very successful 2014 LitFest).

3.     Good idea as a topic for discussion. Ingrid Sharp’s presentation was superb, do bring her back to talk on other topics. Some people (a few) seemed to dominate the discussion.

4.     A very interesting debate and positive start to the Festival of Ideas.

5.     Just to say that I thought that this was a really good discussion. Also I hope that Headingley Festival of Ideas will become a regular event. One issue that could be considered is whether the time is right for a big push to eliminate nuclear weapons, which can never serve any useful purpose.

7.     Interesting information on something I’d never come across i.e. white poppies. Great to have that opportunity.

8.     War is not inevitable. There are alternative ways of solving problems. Do what you can, where you are, with what you have got.
Posted by Richard Wilcocks at Wednesday, May 07, 2014 No comments: