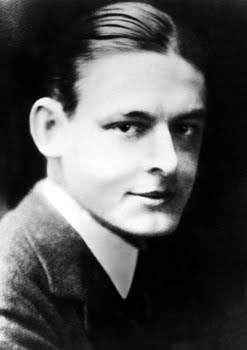 So did T S Eliot really drink at Whitelocks?

Please contact the blog if you can confirm this.
Posted by Richard Wilcocks at Tuesday, January 26, 2010 No comments:

Last March, the Create a Story Sports Writing Competition was a real success, with tall piles of entries, many of a very high standard. Now we are doing it again, but this time attempting to involve more school students: every single high school in the Leeds area has just been sent letters, entry forms and posters to display and to photocopy, and the same materials have been put online.

The competition was born out of discussions between Leeds Rugby Foundation's Arts Steering Group and Headingley LitFest, which took place in 2008 and which have continued ever since. We get on! Headingley should be known for its sporting connections and much, much more.

The competition is open to all students between the ages of eleven and sixteen. Entries must be received at Headingley Stadium by 26 February. The judges will be the same as last year - myself, Glenn Horsman (Leeds Rugby Learning Centre) and sports writer Phil Caplan.

This is from the entry form:


Your story must start using the following paragraphs:

It felt strange to be wearing the new colours, strange but exhilarating. He/she had sweated hard to be chosen to wear them, and now it was the big day, the first chance to show all those loyal supporters what he/she was made of. All the eyes would be on him/her.

The chanting was reaching a climax. It was time to begin.

There will be a presentation on the pitch at half time in the Leeds Rhinos v Hull Kingston Rovers match on Friday 19 March at Headingley Stadium. The winning entry (or extracts from it), together with information on the LitFest, will appear in the match programme.


Posted by Richard Wilcocks at Sunday, January 10, 2010 No comments: