Carnival of the Animals at Shire Oak Primary School 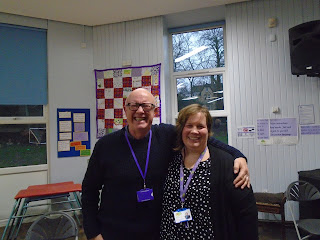 The audience came in  – a score of parents, some grandparents, some small siblings – taking their seats for the performance by Mr Martin's year 3 of the poetry they had carefully crafted over the past three sessions. The theme this time was Animals, and the audience – which included classes 1, 2 4 and 5 - was given the challenge to guess which animal was being described.  We learned what they liked, where they lived, what they felt or did.  A good stretch of the imagination for anyone and inspiring for the classes that we hope will be able to follow on this work in future years.

Some youngsters read their whole poem, some just their favourite line. And although a couple of the children had been in tears of fright in the final rehearsal they still rose to the occasion and delivered their own work with confidence and brio.  This opportunity is about far more than just writing their own poetry, it is about developing the panache to deliver it to a large audience of peers and other school staff filling the school hall.  At eight years old, not bad!  The work is inclusive too, with children of widely differing abilities able to contribute and grow.

As Ian Martin, class teacher, said “This work gives my class the focus, motivation and the opportunity to make them believe they can write, and do, things that people want to listen to. It's great that they get to perform in front of their parents and others too.”

The assembly is the culmination of the work they develop through drafting and editing with James Nash, the professional writer and poet whose work with this school over the years always creates a sense of anticipation.  He was described by headteacher Jane Devane as 'a long-term friend of the school', adding that “Working with a real poet helps our children to see writing as exciting and something they can do. Marvellous.”

We visited a huge range of environments – the deep blue sea, the jungle, the wild, the zoo, the desert, the forest.  We had a wide variety of creatures too.  The blue-tongued skink and the pangolin were rather exotic, but we had plenty of others – kangaroo, otter, brown bear, rhino, shark, a wonky starfish  and a cheetah for starters.  We had a twitchy nose, a dream of eating fish, sleek fur, shiny green eyes, sharp teeth and a talent for remaining hidden.

Some of the individual imaginative lines from the children:
I can see grass waves
I look like a rock with a horn
No one can see my face - I am a star fish
I am the colour of a chestnut
Slimy fish wet fish
I'm a fast climber
I can camouflage
I want to fly but I'm scared of heights
I am the colour of rocks
Sharp claws to rip my prey

… and their opinions too
Working with a real poet was great.
It was fun!!

I learned how to write a poem
I have seen how important it is to edit and redraft my work to improve it
I loved being able to show others in the school what I can do
I will remember that this project was ACE!

Once again, thanks are due to the Inner North West area management committee for supporting this work.

Posted by Richard Wilcocks at Friday, December 07, 2018 No comments: