C. Beck writes:
A performance of A Rehearsal of the Life and Death of Robert Devereux, Second Earl of Essex by Merry Melancholy (Jenny Hill and Simon Nisbett) took place in the performance space of Leeds Library last Thursday (27 September) in front of a substantial, very appreciative audience. It was a rare treat, more a recital than a play.

Jenny Hill was in role as 'Susannah' and Simon Nisbett as 'Richard' who are rehearsing and planning for a book launch - in 1624. The book in question is Honour in his Perfection by Gervase Markam, which is dedicated to the live of Robert Devereux, who was, it turns out, not very perfect. Arcane? Entertaining? Relevant to today? Yes to all of those. Mainly entertaining.

Shaped, most appropriately on this occasion, like a teardrop, the lute was the popular instrument of choice in the Renaissance period, closely related to the oud played then and now in the Arab world and probably an import in medieval times from Spain. It was valued for its gentle, meditative sound and has been increasingly popular in the last few decades.

Devereux knew one of its most famous users - the great singer, composer and lutenist John Dowland, who died in 1626, a couple of years after Markam's book was published. His music was everywhere, and he was one of the many artists (like playwright Christopher Marlowe) who dabbled in espionage on his jaunts to perform in countries like France and Denmark, under the control of Elizabeth's spymaster Sir Robert Cecil. There were rumours that he was a secret Catholic.

In conversations between Susannah and Richard, the details of Devereux's life were relayed to the audience. His relationship with Elizabeth was crucial. A reckless and attention-seeking man who was loved by the London masses, it seems, he was really worried that she was a mere woman, and like other courtiers, tried to install himself as her lover and possible replacement. It worked up to a point.

On one occasion, presumably because of a tiff, he turned his back on her, something one never, ever does, and she boxed his ears. At this, his hand went to his sword. He actually survived, but she sent him abroad on official business. This was not as a diplomatic emissary but as a military leader. Aristocrats were assumed to be good at things like that.

He arrived in Ireland to engage with the army of the rebellious Hugh O'Neill, Earl of Tyrone. Oppression and conquest of the barbarous Irish was the order of the day, but Devereux failed miserably, and one morning, back in London, he barged unannounced into the presence of the queen, something one never, ever does. She was outraged, because he hadn't washed since the campaign and she hadn't had her wig or her make-up put on.

He was ordered into house arrest, and his monopoly on the import of sweet wine into England was curtailed. At home, he wrote lyrics in the fashionable melancholy style and no doubt finished off the last of his stock of sweet wine with his friend John Dowland. It was not long after this that he managed to organise a doomed, quickly-crushed coup against the royal palace, ending up in the Tower of London to have his head chopped off.

All of this fascinating story (the theme of a number of films and plays) was conveyed to us exquisitely with Simon Nisbett's lute and Jenny Hill's voice. Devereux, Dowland, Fulke Greville and others were all featured. Here is the opening part of probably the most well-known one, by Dowland:

Flow my tears, fall from your springs,
Exil'd for ever let me mourn;
Where night's black bird her sad infamy sings,
There let me live forlorn

Posted by Richard Wilcocks at Saturday, September 29, 2018 No comments:

This concert took place on Sunday 23 September in St Chad's Church, Headingley to commemorate the Armistice of 1918. St Peter's Singers collaborated with Trio Literati to interweave poetry from the First World War with movements from Fauré's Requiem.

C. Beck writes:
The word 'veteran', a word which can be applied to retired combatants, has other connotations, so it can be applied appropriately to the performers at this beautiful concert. They are veteran actors, readers, singers and musicians, with the word bringing long experience, polished skills and professionalism to mind. In short, they are pretty good at their job, and it showed.

The soulful and melodious Requiem by Gabriel Fauré, a shortened version of the Latin Mass completed in the late nineteenth century, is ever-popular, a standard at commemorations like this, and its final movement In Paradisum is often included in funeral services, because not only is it the most serene section of the whole thing, which conjures a vision of a world at peace, but it is actually part of the liturgy of the Catholic burial service which was added by the composer. It gives the impression that Fauré was a man of unassailable faith, but this is misleading, because apparently he was a sceptic. 'Light Perpetual' in the concert's title is from the words of the Agnus Dei movement - 'et lux perpetua luceat eis' - 'let perpetual light shine on them'.

St Peter's Singers were on excellent form, conducted by Simon Lindley, with soprano Julie Kilburn and baritone Edward Thornton as soloists. The organ (Alan Horsey) substituted for an orchestra. Richard Rastall, Jane Oakshott and Maggie Mash, who make up Trio Literati, were also on excellent form, providing the 'Echoes of War' part. This was more tormented than serene. The words of mostly well-known war poets were used to conjure sometimes horrific images of the catastrophe which was supposed to be the 'war to end all wars'. The poets were certainly not well-known until after the Armistice, with the exception of A E Housman and Rudyard Kipling, slim pocket editions of whose works were sometimes inserted into soldiers' knapsacks.

Wisely, Trio Literati presented a range of views on the war, from John McCrae's 'In Flanders fields', always heard at Remembrance services, to 'Dulce et Decorum Est' by Wilfred Owen, which was delivered particularly powerfully by Maggie Mash. One short poem was in German, with an accompanying translation - August Stramm's  'Wache' (Guard Duty) - read by Jane Oakshott with a pretty good accent. Carol Ann Duffy's 'In all my dreams' ('Last Post') was the final offering - 'if only poetry could tell it all backwards'.

Other events marking the Armistice in Leeds include Penthos Requiem by two members of St Peter's Singers - emerging composer Matthew Oglesby and award-winning poet Hannah Stone. This is at another Headingley church - St Michael's at 6pm on Saturday 27 October. Admission free.


Audience comments
Dear Jane, Richard and Maggie
I just wanted to say how much we enjoyed the Trio Literati and St Peter’s Singers concert at St Chad’s yesterday evening. It was a truly moving performance. …Thank you again for a memorable evening.
Best wishes
AB

Morning Jane, ( From AC)
Just to say how much Peter and I enjoyed last night's moving performance at St Chad's.

Dear Maggie. That was wonderful! It was so powerful and poignant at the same time. Thank you . I really enjoyed the evening.
(LB )

Hi Jane
You definitely caught me on the hop when you asked me if I had enjoyed it last night.  I had been very affected by the readings - almost moved to tears at times and had been amazed when people clapped.  I wanted to sneak away and just think about it, so not enjoyment, stunned or even over-awed might have been a better word.  I did not know all the poems and some I had not heard for years.  I love Faure's Requiem though.  I thought it was a beautifully thought out performance over-all.
PR

Dear Richard,
Thank you for inviting us [St Peters’ Singers[ to join you at St. Chad's last evening. My guests found the combination of music and readings really powerful, with the images adding an extra dimension to music they've heard so many times before. It was a special evening.
JK

Dear Jane
Thank you all for Sunday’s very moving event. Wonderful choice of poetry commemorating all those poor lads and,  as always, beautifully read.
J and J L

St Chad's Church provided an atmospheric setting for a captivating evening of music and poetry. A very entertaining and sociable evening. Thank you!
? BD

Jane - Thank You so much! What a wonderful evening:) just beautiful, the music and poems worked so well alongside each other. The friend I brought along also loved it .  You should be very chuffed,! Mxx
MS 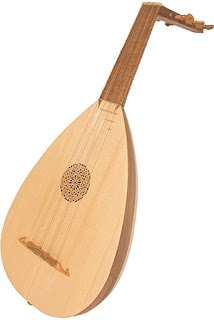 History, Poetry, Drama and the sound of the Lute!

Merry Melancholy is at the Leeds Library in Commercial Street at 7.30 on Thursday 27 September. It's free!
Meet a pair of brilliant performers - poet Jenny Hill and lutenist Simon Nisbett

Posted by Richard Wilcocks at Wednesday, September 19, 2018 No comments: 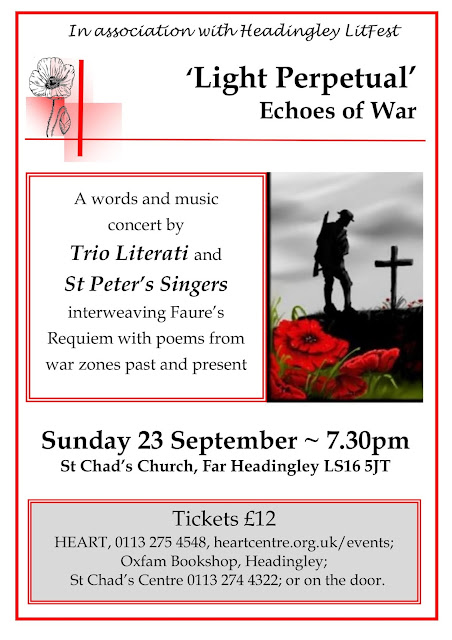 Posted by Richard Wilcocks at Wednesday, September 19, 2018 No comments: