The Yerney Project by Ray Brown

Roberta Stabilini writes:
Yerney is an old farmer and former bailiff. He has been working near his hometown, earning the respect of the local community. The story begins when a new young bailiff takes Yerney’s place when his partner dies.  Even though he is the son of Yerney’s old master, with whom Yerney worked for forty years, he bullies him, telling him that he is old, and that he should find some other place to stay (“Time flows. All things must end”). Yerney tries to reason with him, telling him that he and Sitar built that master house together when they were young. But when he realises that he cannot convince Young Sitar, he decides to go look for justice by himself.

Thus, failing to get justice from the local Mayor, Yerney goes to Ljubljana to discuss his situation in court. However, the judges do not take him seriously because of his clothes, his countryside manners and his repeated and agitated requests to “put this on paper.”  As a result of his talk with the judges, Yerney gets very upset and thus is sent to prison. However, despite the hostile circumstances, he keeps asking for “justice for those who deserve it, and mercy for those who don’t.”

He is aware of the rightfulness of his behaviour and he is determined to be treated according to his rights “When justice is done, they will be ashamed. They will regret their behaviour.”

Despite all the previous vexations, Yerney decides to go to Vienna, the capital of the empire, to speak with the Emperor himself.  Once again, he is not taken seriously; he is jailed, mistreated  and then shipped back to his hometown.  The play ends when Yerney goes back to Sitar’s house to get his pipe and the house is set on fire.

The story of Yerney is told very realistically and movingly in The Yerney Project. The play perfectly portrays the indifference of powerful, corrupt men in front of the requests of an old, poor, hard-working countryman.  The Yerney Project is a quest for justice, in which Yerney bravely strives to find the meaning of his life, of all those years spent working, only to discover he would lose his place in the community once old.

The play was beautifully staged by the actors, who succeeded in mesmerising the audience throughout the performance.  A wonderful opportunity to see a Slovene classic with so many echoes for today.

Ray Brown based his play on a novel by Ivan Cankar (d1918) - you can find out about him by clicking HERE. 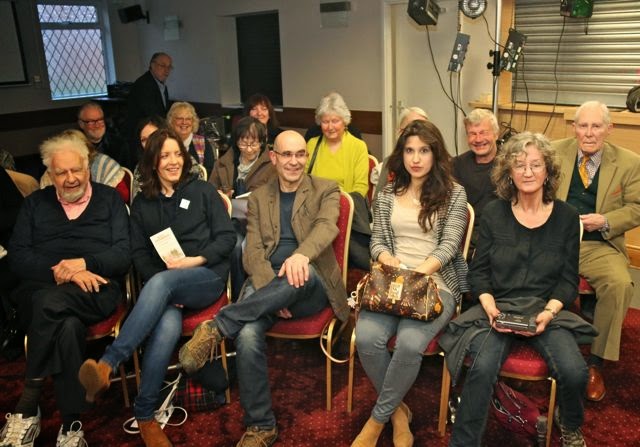 So good to have the opportunity to see new work.  Thank you.

Very interesting play – the innocent who believes in justice and still retains his dignity despite his maltreatment.  Very good performances and moving too.

Very engaging.  Well performed and imagined for a confined space.  Lots of energy and interesting adaptation.

Enjoyed ‘intimate’ presentation in a small space.  Actors appeared to be speaking to us individually.  In turn therefore possible to follow the ‘plot’ because every actor could represent a number of players, so it was enabled to enlarge the political system against the individual.

Felt the piece was very intense and the inevitability somewhat crushing/saddening.  Found it had great universal  truth and therefore engaging.  Greatly enjoyed the work of the cast.

A moral and affecting piece.  Excellent performances all round.  A very worthwhile evening.

Very interesting – good to have a play from a different cultural background.  Well performed.

This was my first time at LitFest and I came because I am Slovene.  I was interested in this particular event because I know the original short novel this play is based on.  I was very impressed and enjoyed the play very much.  It was cleverly written and very well performed.  I would be interested in coming to more events organised by LitFest in the future.

A brilliant piece of writing, powerful and timeless (unfortunately!)

A very good opportunity to see a new (I think) and v interesting piece of work without the cost or hassle of going to the theatre in town.  Thank you.  Well worth seeing and well done.

I thoroughly enjoyed the play.  It was engrossing, credible and took me wholly along with the story of Yerney.  The author captured the despair of a dispossessed simple man.

A very enjoyable, well acted and well written performance worth the trip out.

A real heartfelt play. Full of soul during time of hardship!

Interesting project.  Good acting.  Perhaps next year we can have some sporting interest, hopefully cricket!

I found the play gripping and the plot very plausible.  One felt sympathy for Yerney – we should be grateful for Legal Aid and Citizens Advice Bureaux!  Well acted – each character was well defined.

It was amazing play that I’ve ever seen before.  The script (story) and actors have carried the audience to another dimension.  Thank you for arranging this play and the unexpected night.

Unusual subject and period of interesting mix of accents to bring the characters to life.  Well executed play

Great to see a ‘read’ performance.  V enjoyable storytelling that echoed so much present injustice!  Let’s have more.

Posted by Richard Wilcocks at Sunday, March 29, 2015 No comments: