...am I to spend all the best part of my life in this wretched bondage, forcibly suppressing my rage at the idleness, the apathy and the hyperbolical & most asinine stupidity of those fat-headed oafs, and on compulsion assuming an air of kindness, patience and assiduity? 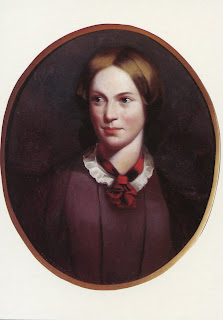 These were the thoughts of the young Charlotte Brontë, as written into her journal when she was a teacher at Roe Head School in Mirfield.

The short-sighted author had a habit of making entries in it while the class was in progress: there are reports of her writing in tiny script, her nose nearly touching the paper, then sitting with her eyes closed. The girls in front of her might have thought she was receiving spirit messages.

She did not make much of a success of being a governess either - to just two of the small children of Skipton mill owner John Benson Sidgwick. When she lived with him and his family at his splendid house - Stone Gappe in Lothersdale, she was barely able to control them, and found them irritating, but she did admire his Newfoundland dog. Stone Gappe became a model for Gateshead in Jane Eyre.

Richard Wilcocks, a former Chair of the Brontë Society, will speak about a lot more of her writing and her life when he gives a Powerpoint- assisted talk in Headingley Library on Thursday 8 December at 7pm called ‘Charlotte Brontë – Terrible Teacher, Brilliant Novelist’. He will also go into role as John Benson Sidgwick, who will give his own view of the unhappy woman he employed, and of governesses in general.

The talk is a LitFest ‘Between the Lines’ event and it is free. The main part of the annual Headingley LitFest (the tenth) takes place in March next year.

To receive postings automatically, put your email into the FOLLOW box top right.
Posted by Richard Wilcocks at Friday, November 25, 2016 No comments:

No gadzookery, plenty of mud and blood - by Richard Wilcocks

It was a shabby affair, by a poor northern road, in the May of 1214. That was how it all began, thirty years ago. Often I wish to God I had been somewhere else.

So begins Peter Morrison’s novella A Lonely Road, a definite page-turner set in a time of political flux and shifting loyalties. In the aftermath of violence on the York to Lincoln road, a young advocate, Thomas Sturdy, comes upon a grave at the edge of the forest...

In Headingley Library yesterday, the author soon captured our interest by reading from the opening pages, and later on in the evening picked out some really dramatic passages which had us gripped, including one where the young protagonist is lured into a dark corner of York Minster, grabbed round the neck and threatened with a knife by a certain William Scarlet. There is plenty of mud and blood in this story, and no attempt to glamourise life in the thirteenth century. Morrison is not a romantic medievalist. Robin Hood (Robin Locksley) plays a part only in reports and memoirs, his life and activities as an outlaw described only in the words of a kind of deposition, a document written by one of the very un-merry men as part of a deal to save his skin. Lawyers are well used to such things, then and now.

It is written in the English of today: Morrison was meticulously careful in his choice of language, avoiding what professional editors describe as “gadzookery” – the use, or overuse, of archaic expressions – and in his determination to supply the reader with just enough period detail, in spite of the extensive research. “It is too easy to weigh the story down with material like that,” he told us. "It has got to move forward constantly and easily."

In fact, he told us much more about his methods, and about how A Lonely Road came into being, sharing with us his initial enquiries, the way he sought out advice, not only from friends (who usually simply flatter) but also from professionals who need a fee, his polishing and revising and his relationship with the company (York Publishing Services) which enabled him to enter the universe of self-publishing, which is expanding all the time.

“It is not vanity publishing,” he said. “Steer clear of the companies which offer that.” He was interviewed about his motives by YPS (“They were happy to hear I was not in it for the money and not one of those authors who thinks he has a killer manuscript to make a fortune.”), given plenty of advice and some alternative cover designs. Apparently big publishing houses usually do not give choices like that to the captive authors in their stables.

Novellas, he told us, are not treated with respect in this country. He gave the example of Ian McEwan’s On Chesil Beach, which appeared in 2007 as a ‘novel/novella’. Some reviewers, and some readers, were outraged. Why was it “too short”? Were they worried about not getting value for money? Are doorstep novels always the ideal? “The Germans appreciate the value of novellas,” he said. “ They have a long history of reading them.” He recommended that we read works by the London writer Gerald Kersh (especially The Implacable Hunter) and by the post-WW2 German writer Heinrich Böll. Böll’s The Train Was on Time (Der Zug war pünktlich) was picked out as memorable.

A Lonely Road can be bought online (£3.99) from www.YPDBooks.com

Peter Morrison will launch a full-length novel – A Cause to Mourn – in 2019.

Inspiring to hear how you began writing and persevered, to self-publish your novella

Really interesting to consider ‘the flaws of heroes’ and to put these into historical context.

Looking forward to reading the book!

Enjoyed this interesting talk, thanks!

Wish my husband had been here!!!

I shall follow up his suggestions about Heinrich Böll. Modern German literature (in translation) should be better known here.

Class teacher Rachel Aspin: “The youngsters were so looking forward to performing their work; it has definitely changed the behaviour of some of them.  One young boy, normally very reluctant, sat down so diligently to write it was wonderful to see.  And the confidence of the whole group has just soared.”

What have you learned with James?  To make poem lines shorter. Poems don't have to rhyme.  Practice makes perfect.  Editing and redrafting.

Why is it good to share your work?  So you can get over the fear.  And so others might want to make their poems.  So you can maybe inspire your friend or parents.

What will you remember about this project?  Every single thing!

Final word to Alisha, when asked to sum up in one sentence what the class had got from the exposure to reading and writing poetry: “Inspiration and happiness.”

Tales of Beowulf are to be scanned for the school website then put on display.  A lovely legacy for the future readers of Quarry Mount.  Thanks once again to the Inner North West area management committee for granting us the funding for this project.  Thanks, too, to Rachel Harkess of Headingley LitFest who helped out with the workshops.
Posted by Richard Wilcocks at Thursday, November 17, 2016 No comments: