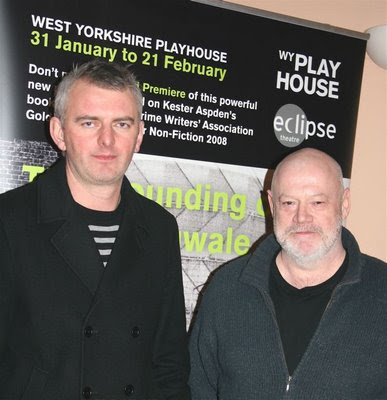 A terrific starter! Last Sunday afternoon, Kester Aspden and Ian Duhig attracted a large and appreciative audience to the Yorkshire College for the first LitFest event of 2009, in spite of the snowy weather. We were starved with cold outside, but soon warmed up inside, especially after being served with tea out of a proper teapot and home-made cakes.
Ian Duhig began the event with a selection of his poems, which included Róisín Bán (that’s White Rose in Gaelic), about the obliteration of the much-loved Roscoe pub by the new Sheepscar Interchange, and God Comes Home, his brilliant poem on the Oluwale case, which you can read by clicking here.

Kester Aspden began by talking about himself and how he came to write Nationality Wog: The Hounding of David Oluwale after researching other topics which might be described as a little arcane. Well it’s more than lucky that he did get it together, because now it stands alongside the 1999 Macpherson Report on the bungled investigation into the murder of Stephen Lawrence in what might be called the History of Institutional Racism in the Police Force. He read from the opening pages and used the two words which tend to come up frequently when the subject is discussed – “bad apples”. Inspector Ellerker and Sergeant Kitching, who were sent to prison for a lot less than manslaughter, were not the only ones, according to Kester Aspden: “There were more than two bad apples”.

He then went on to make the point that the rest of the Leeds police at the time was not corrupt, that the wrongdoers were shopped by a young policeman, and that the hero of the story was DCI John Perkins from Scotland Yard, whose persistence resulted in the prosecutions.

Discussions afterwards covered attitudes to asylum seekers today, the degree to which David Oluwale was “mad” (apparently, the cast of the play debated this for hours) and the effects of closing down huge institutions/asylums like Menston.

Poet Rommi Smith made a powerful appeal for the Oluwale Memorial Campaign at the end of the event, which resulted in a good amount.

If you are reading this before the run finishes at the West Yorkshire Playhouse, get down there! You can read Alfred Hickling’s review by clicking here. You can also watch the trailer here.
Posted by Richard Wilcocks at Wednesday, February 11, 2009 No comments: