The Hounding of David Oluwale

The image below (the many snapshots are all of parts of Leeds which would have been known to Oluwale) was produced by the West Yorkshire Playhouse as part of the publicity for the play version of The Hounding of David Oluwale. I'll be seeing that on 4 February in my capacity as editor of Harmony, the news magazine of the Stephen Lawrence Education Standard, which is based at Education Leeds. The play will be reviewed, because the story is very relevant for anyone concerned about institutional racism in the police force - of the sort condemned in the 1999 Macpherson Report which looked at the way the Metropolitan Police had investigated the racist murder of Stephen Lawrence in London.

The Headingley LitFest event on Sunday afternoon 8 February at 4pm at the Yorkshire College of Music and Drama is not just a follow-up for people who have seen the play, but something which stands by itself. It is an excellent opportunity to meet and to question Kester Aspden, the author of the brilliant book which inspired the play, and to listen to poet Ian Duhig. Put it in your diary and on your calendar. 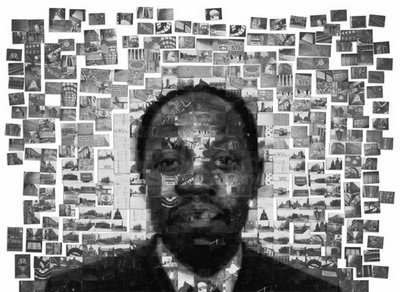 Posted by Richard Wilcocks at Thursday, January 29, 2009 No comments:

If you would like your child to participate in When the Wind Changed with the Blahs (that's three of them in the picture) at Headingley Library on Saturday 21 March (two sessions beginning at 10.30 and 11.30am) please get the name down on the booking list. There's a maximum of twenty per session. Lists are currently at the library and at Café Lento. Similarly, if you want to join Ian Clayton's writing workshop in the café at Headingley Stadium on the same day (it begins at 2pm), get your details on the list in the same places. You could also send an email.
Posted by Richard Wilcocks at Saturday, January 24, 2009 No comments:

Sunday 8 February
The Hounding of David Oluwale
Kester Aspden and Ian Duhig
A great opportunity to meet the author of this critically acclaimed book, the result of painstaking research into the mystery of the life and violent death (in Leeds) of David Oluwale. It is a story that reverberates in our city today and the event coincides with the premiere of the play - adapted from the book - at the West Yorkshire Playhouse. Kester is a former Professor of Criminology at Leeds University. His book was awarded the Gold Dagger Award for non-fiction. Ian Duhig is a widely-acclaimed poet who has worked with homeless people. He has written movingly about David Oluwale. Proceeds from this event will go to the Oluwale Memorial Campaign, in this 40th anniversary of his death.
4 – 6 p.m. Yorkshire College of Music and Drama, Shire Oak Road.
Entry £2* with a collection.

Thursday 19 March
Virtual Aires
Trio Literati performs in a celebration of Aireings, the Leeds-based poetry magazine dedicated to publishing new work, which has been running for over thirty years and which is now moving to the internet. There will be an open mic session after the interval.
7.30 pm Yorkshire College of Music and Drama, Shire Oak Road
Entry £5*

Friday 20 March
Making Crime Pay
Bob Barnard will reveal a few tips of the trade. Many will remember Bob from the last LitFest, when he talked about the Brontës. He is a veteran crime writer, winner of the Crime Writers’ Association Diamond Dagger Award and Best Crime Short Story 2007.
7pm Headingley Library, North Lane
Entry £3*

Saturday 21 March
When the Wind Changed
The Blahs are a group of Leeds-based theatre makers who will make this story up with children aged 5 and 6 by tapping into their natural ability and desire to make faces.
10.30 – 11.00am and 11.30 – 12.00noon
Headingley Library, North Lane
Free. Please book.

Saturday 21 March
Writer's workshop with Ian Clayton
All aspiring writers are invited to have a go. Sign a list in the Stadium or at Headingley Library. Or, send an email.
2 – 4pm Café – Headingley Stadium. St Michael’s Lane.

Saturday 21 March
An Evening with Phil Caplan and Ian Clayton
Ghost writer Phil Caplan will talk about working with well-known sports personalities, JamiePeacock for example. Jamie Peacock will be there, listening. Author and television presenter Ian Clayton will hold forth on his book Bringing it All Back Home. Ian listened to music as a kid to escape and as an adult to connect. He has created a book about love, friendship and loss – about life and living it. While searching for a soundtrack to his own life story, he has discovered the heart that beats inside us all. Any proceeds go to the Leeds Rugby Learning Centre and the LitFest. Pie and Peas. 7.30pm Premiere Suite, Headingley Stadium
Entry £12

Sunday 22 March
Climate Change
A new one-act play by Headingley jazz singer and writer Lynn Thornton, a light-hearted treatment of a topical issue, in which global changes are paralleled by changes in the lives of the characters. This will be a script-in-hand performance. A discussion will follow.
7.30pm Yorkshire College of Music and Drama, Shire Oak Road
Entry £4

Wednesday 25 March
Places
The first half of the evening will be hosted by Billy Walker (local poet and author) who will read a selection of his own poems as well as poetry by other authors on the main theme. The second half of the evening will be open readings from the floor. Organised by Leeds Combined Arts.
7.45 p.m. Headingley Community Centre, North Lane
Entry £2 on the door

Friday 27 March
Snake-pits and Hairy-Breeks
An Emeritus professor of Icelandic Studies, Rory McTurk is best known for his work on Ragnar Hairy-Breeks, a Viking hero who met his death in a snake-pit, bound by hand and foot, but still able to sing cheerfully of a lifetime’s adventures. Rory’s lecture will highlight, among other things, the Headingley connections of this colourful figure.
7pm Headingley Library
Entry £3*

Saturday 28 March
Tea with Beryl Bainbridge
Dame Beryl Bainbridge will speak about her latest novel, The Girl in the Polka Dot Dress, herself, and a lifetime’s work. Beryl Bainbridge began her working life as an actress and has remained an entertainer ever since, as one of Britain's most popular and best-loved novelists. Her work has attracted a wide readership as well as critical acclaim, having been short-listed for the Booker Prize four times, and winning the Whitbread Prize three times, most recently for Every Man for Himself (1996). Her trademark is the sardonic, even at times macabre wit in her books, usually mercilessly black comedies with eccentric characters.
3 pm New Headingley Club, St Michael’s Road
Entry £6* Please book.

Saturday 28 March
Sonnets
A new play by Paul Priest presented as a script-in-hand performance by Theatre of the Dales. Shakespeare's sonnets have a story behind them. The basic facts are not hard to guess, yet the inner reality remains almost as mysterious as the sonnets themselves. This play tries to let the sonnets and the story illuminate each other. Raised in America, Paul Priest is a Shakespeare scholar and retired university lecturer now living in Headingley.
7.30 pm Yorkshire College of Music and Drama
Entry £6

Sunday 29 March
Poetry at Dare
One of the North's foremost poets and writers, James Nash works in schools, runs workshops with writers’ and readers’ groups and comperes events – like this one. Bring your poems! James will read some of his own work too, including poems from his new publication Coma Songs.
2 – 4pm Dare Café
Free