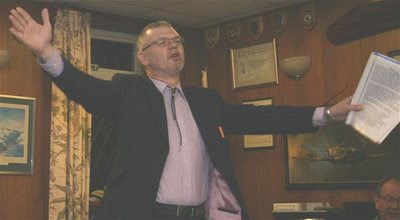 Richard Raftery (that's him in the picture) was feeling expansive at the LitFest Launch Party yesterday. It was held in the long room at the back of the New Headingley Club. Daffodils adorned every table.

Richard Wilcocks spoke about the superb response to the 'Create a Sports Story' competition, organised for high school students by the LitFest in Partnership with Leeds Rugby Foundation, and then read out the winning entry, Richard Raftery, Trio Literati and poet Murray Edscer performed, and Trevor Bavage was the affable man with the gavel in an auction which raised two hundred pounds for LitFest funds. Winners of the literary - and very non-trivial - quiz were treated to drinks at the bar and Head For Heights provided excellent music. Now for the first event on Wednesday - Salvage by Peter Spafford.