Ben Okri booked for the LitFest 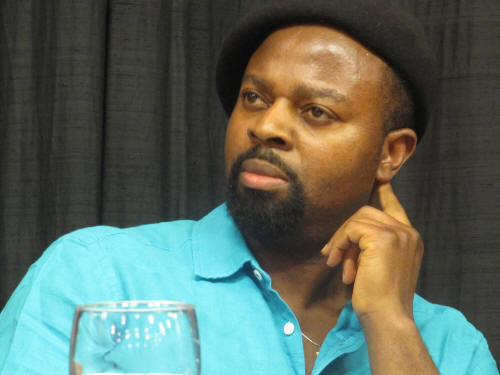 Ben Okri, one of the most acclaimed African writers within the postcolonial tradition, will be speaking on the afternoon of the final Saturday of the Headingley LitFest (26 March) at the brilliantly refurbished Heart centre in Bennett Road.


Often described as a 'magic realist', Okri's novels and poems are written in English but draw heavily on Yoruba myths, stories and culture.  Praised for his experiments with new literary forms, he is probably best known for The Famished Road, which won him the Booker Prize in 1991. In this, African and European literary traditions meet, in a story narrated by a 'spirit-child' who moves between the worlds of spirits and human beings, observing the chaotic history of his country. There is plenty in it about corruption - economic and political - in modern Nigeria, and about the devastation brought by war.


The oral storytelling tradition of Africa is a powerful influence, and Okri has added Ancient Greek legends, Shakespeare, Tolstoy and Dickens to the list. Those who want to do some background reading before 26 March in addition to our guest's work might like to read the classic Things Fall Apart by Chinua Achebe and Amos Tutuola's The Palm-Wine Drinkard. Okri's poem The Awakening, written to mark the Millennium, appears on this Oxfam Cool Planet website, and you can find a full bibliography and biography on this British Council website.


Tickets are not yet available for this, or any other event, because the programme's final details are still being sewn up, but if you want to express on interest in the Ben Okri event, email your details.


Other guests include Rommi Smith, who works to fuse spoken word and music, the writer, singer and former television producer Isabel Losada, who will give a presentation on how to get published, Nicola Beauman, the founder of Persephone Books, which specialises in rediscovered inter-war novels by neglected women writers and a flock of female poets called Wordbirds.

Veteran writer for teenagers Robert Swindells (Stone Cold, Brother in the Land) will speak to Year 9 students at Cardinal Heenan Catholic High School, other high schools will hold poetry slams and the Flux Gallery will show a film about Irish writers and also host the launch of poet Genny Rahtz’s collection Sky Burial.

There will also be 'house events', following last year's successes, on Sunday 20 March. Apart from the Heart Centre, things will take place at the New Headingley Club, the Lento Café on North Lane, the LS6 (Clock) café on Headingley Lane, the Flux Gallery on Midland Road, Headingley Library and local high schools.


*Now read about what happened:
http://headingleylitfest.blogspot.com/2011/03/ben-okri-in-headingley.html
Posted by Richard Wilcocks at Thursday, January 06, 2011