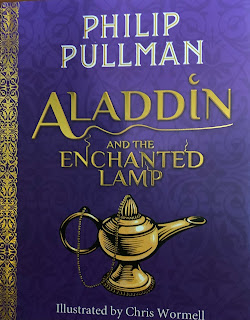 We are in the world of the Arabian Nights, eight young writers from Year 5 at Quarry Mount Primary School and me.  It is a complicated world where the story of a Chinese boy, originally written down in Arabic, has been retold by the redoubtable children’s writer Philip Pullman. It is a story of enchantment, and magic is what we are seeking to write about.

We have fascinating conversations about what our talisman would be in the 21st Century, where Aladdin had a magic lamp and an iron ring we might choose  a more modern object to summon up the genie. And what would we wish for and might the wish go wrong?

I had written the beginning of a poem about magic rings [based around a ring I actually wear] and genies [mine was a mermaid] and I had made my poem rhyme which led on to us discussing whether poems have to rhyme or not.  They don’t, but clearly members of my group like rhymes in poems.

And then they get writing and their imaginations and story-telling skills come into play and the fun begins.  We hear their work and two of them share their first drafts with the rest of the class to great acclaim.

For our next session we look at what we’ve written [including some great poems that some of them had written at home after our first workshop] and start to edit and redraft, and to take the story on a bit further.  Great lines stand out in everyone’s pieces, I’m particularly fond of,

‘Be wise with your wish

It’s a once in a lifetime,

Don’t rush or be quick’,

We’ve got ideas so what will we do’.

As before two of the eight share their work with their classmates in Year 5; their confidence in performing their poems is growing and they read very well.

In our final session all eight poets read their ballads in a virtual assembly with Years 2 to Year 6.  They read brilliantly into the laptop camera to great applause. Later their class teacher Rachel Clarkson will film their performances for a more permanent record,

My fine young writers are brimming with enthusiasm for our work together. One participant said, ’I was nervous at first but then I got more confident and wrote a masterpiece’ and another. ‘an over all great experience about learning about writing poetry’.

Class teacher Rachel Clarkson said about the project, ’Year 5 have thoroughly enjoyed working with James Nash.  They have all been engaged and inspired by the activities and have even started to write their own poems at home which they have enjoyed sharing with the class’.

Perhaps the last comment might go to the receptionist on my way out of school, because word had clearly spread

‘The children have all thoroughly enjoyed it, James’.