Doug Sandle writes:
The yellow daffodils on the HEART café tables provided a freshness and uplifting ambiance to contrast to the damp and cold of a winter outstaying its yearly visit, a fitting setting for an evening that lifted the spirits and warmed the soul with readings from George Szirtes, ably supported by Kim Moore.  Bringing together one of our foremost poets with a prodigious body of a lifetime’s work and literary achievements with a young poet, successfully emerged rather than emerging but one nevertheless at an earlier stage of her poetic journey, worked very well for a LitFest whose aspiration is both to bring to Headingley established writers and also to encourage and nurture younger talent.

I was delighted to introduce George, having been one of his lecturers and tutors at the Leeds Polytechnic (now Leeds Metropolitan University) when from 1969 to 1972 he was a fine art student. Both his life at Leeds and continuing interest in visual art featured among several of the poems he presented. A connection with his former student days was the poem Poet about Martin Bell, who was Gregory Fellow in Poetry at Leeds University 1967 to 1969 but who thereafter taught at Leeds Polytechnic for a time and who was very influential in nurturing  creative writing among the students (and staff) of the art and design department. Poet makes reference to James Thompson's City of Dreadful Night which was parodied in the title of Martin’s powerful response to and critique of the Leeds of the sixties, the City of Dreadful Nothing. Bell’s poem refers to the  ‘Merrion Centre with its special subways for mugging’ and the Merrion Centre receives a mention in another Leeds related poem read by George, Chuck Berry Live, which begins
Too tired to dance with anyone right now
After the gig, here in the Merrion Centre
Where Chuck Berry has just taken his bow.
The poem goes on to describe a bleak experience of Leeds, which has much of the tone of
Martin Bell’s City of Dreadful Nothing.  Another poem, Girl Flying recounts an incident when George witnessed a girl student caught by a fierce wind on the steps that led up to the Leeds Polytechnic’s H Block, to such an extent she was blown into the air and which stirred his imagination to imagine her flying:

When she stood at the top of the stairs by the door
of the college, the wind caught her up and so
she flew all the way down, as if no more

than a micro-detail on a map that any breeze could blow,
and if she could have flown of her own will
at any time she chose, this was how she’d go,

These two poems are one of five grouped together under the title Yorkshire Bitter and another read was Night Out, about his experience of a notorious Leeds Pub of the sixties, The Hayfield, a poem, which as in several of his poems, contained references to popular culture of the time with mentions of Jack Palance, Pat Phoenix and Leeds United footballers Sniffer Clarke and Norman Hunter. The poem begins:

Everyone wears drag around here. The barman
In gold lamé and vast peroxide wig
serves pints of Sam Smith to a local Carmen
wearing the cruiser’s full authentic rig
of white blouse, fish-nets, tiny leather skirt,
with three day’s stubble, mouth like a ripe fig.
Visual art, the visual and the painterly is also still a concern as exemplified by poems from A Howard Hodgkin Suite and also from  Minimenta –postcards to Anselm Kiefer. The sensual synaesthetic relationship between colours and the sound of words was evident in a poem entitled Colours, which beings with fourteen lines of colour names – some as in common use and others made up.

Some of the poems presented also related to photographs and film or were structured around a
celebration and exploration of the interrelationships among the forms, patterns and sounds of words. His final poem Say So was much enjoyed by the audience for its musical resonance.

However while the imagery and pictures in his poems are powerful as such, they often rapidly develop and lead us on a journey into the metaphysical and in the case of his reading Seeking North from a sequence entitled Northern Air: A Hungarian Nova Zembla a journey is itself the means for this. His poem Allotment from the Mimimenta –postcards to Anselm Keifer is another example, which begins

When I glimpse from the train a clutch
of allotments, a tight row of cabbages or spuds
or garden peas, I think there are gods
beyond gods who live in the bones
of men and women, shivering at their touch;
that when rain falls it weeps hailstones;

There was much variety in the reading and a personal and moving Prayer for my Daughter will have resonated with parents in the audience and such as Madhouse had political implications.
All together it was a very powerful and inspiring reading and while it was George Szirtes’ first visit to Leeds for a long time, let us hope that it will not be too long before the next one.

Richard Wilcocks writes:
Two things in particular struck me as I was listening to Kim Moore read. The first was that she, a mistress of the lyrical, should team up with another musician, or an ensemble, to create new material for new performances: Teaching the Trumpet would be an obvious starting point. It provides good, professional advice: 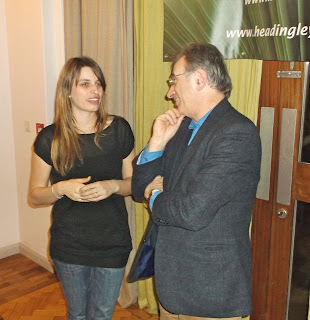 So each one becomes the beginning of a word.
Sing the note inside your head then match it.

It’s advice which is brought into a new dimension by the closing lines about remembering… the man who played so loud/ he burst a blood vessel in his eye… lines which invite much surmise. Who? When?

The second was the confident way in which she can speak from her own dark depths, like a cave-based oracle or a priestess well in touch with the lupine side, which has been noted by plenty of commentators, lifting off from the terrific title poem of her 2011 pamphlet If We Could Speak Like Wolves. Lupine could indicate sensual or fleshly, but it’s a lot more than that: Today at Wetherspoons demonstrates how tellingly she observes the people she encounters on the shore, in the street, on trains, in pubs:

…The women tilt
in their chairs, laughter faked,

like mugs about to fall, cheekbones
sharp as sadness…

The poem goes on to address matters lupine, or perhaps just seedy:

The key poem for me on this particular evening was Hartley Street Spiritualist Church. The interest in the dark depths is in there, of course, how could it not be when the church in question has a psychic artist, shudder-inducing mediums (who were trainees, we were told afterwards) and a voice whispering to her that a drawing of an elderly woman with a perm is a depiction of her grandma? But the poem is not really in any gothic domain: there is a hymn by Abba (I believe in angels) and a spirit dog wandering around. The dry humour is delicious.

Her personal narratives – for example one of her more recent poems which is centred on when her husband had a nasty fall in the bathroom – often celebrate the unexpected, or the odd, and then there is always the landscape of  her part of Cumbria looming somewhere behind the characters, a cloudy cyclorama.