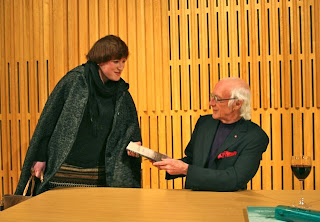 Roger McGough did not disappoint: the capacity audience at the magnificent Howard Assembly Room loved him to bits. As he read from As Far As I Know, adding witty commentary and extra personal narratives, the laughs and murmurs of appreciation came at frequent intervals, in spite of (because of?) the melancholy subject matter – moving poems on growing old, lost youth, love and death. At one point he reminded me of the comedian Paul Merton, not in appearance but in the wordplay, the wit and the ability to see things afresh, from interesting angles. At another point I was struck by the dark cloud I saw looming behind some of the poems, Knock Knock for example:

The man from the murder
Still on the loose

…Did I hear someone knock
Who’s that at the door?

Or in Nice Try:

As we speak, they’re out there
Scythes at the ready, playing hide and seek.

Me under a bush, you in the shade
Someone counting to ten, sharpening a blade.

And I amongst many was deeply impressed by Not For Me a Youngman’s Death, an update on possibly his most famous poem of the Sixties, when he was more fast-living and went to all-night parties, Let Me Die a Youngman’s Death. It was suggested by Carol Ann Duffy, and he tells us about what it’s like now:

My nights are rarely unruly.
My days of all-night parties
Are over, well and truly.
No mistresses no red sports cars
No shady deals no gangland bars
No drugs no fags no rock ‘n’ roll
Time alone has taken its toll 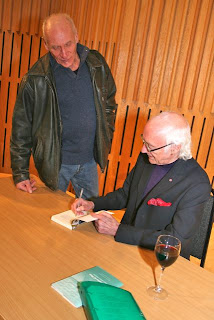 Creating a league table of top contemporary poets is likely to be at best contentious, at worst woundingly humiliating, but that is what the poetic powers-that-be did four decades ago. They were connected with Poetry Review, the influential magazine of the Poetry Society, and included the likes of Andrew Motion, our previous poet laureate. Roger McGough, often associated by commentators with The Beatles, popular and famous as a member of The Scaffold with its Lily The Pink and Aintree Iron, a Liverpudlian with working class origins, was put into the ranks of the second division, at the bottom. That’s the problem with popularity – some people think you can’t be profound as well, and that to be clever you have to be arcane. Perhaps it was thought simply that the scousers were getting above themselves.

It rankled with him, and now it comes out in this latest collection. One  poem in it which he did not read – Scorpio – begins with what the popular John Betjeman wrote: ‘Our poems are part of ourselves. They are our children and we do not like them to be made public fools of by strangers’. McGough continues:
...
I will never reveal the names of those strangers,
Fellow poets some of them, and literary critics
Who have made public fools of my children.
They know who they are. Those still alive, that is.
Their names inscribed on the base of a paperweight.


But McGough rises above mere spleen-venting, which is not his style, as anyone who has been charmed by him as the presenter of Radio 4’s Poetry Please well knows. He is, in fact, a bit of a saint, the ‘patron saint of poetry’ in the words of today’s poet laureate, Carol Ann Duffy, and the wheel has turned: in addition to being a CBE, he is the new President of the Poetry Society. There are certain ironies to savour there.
Posted by Richard Wilcocks at Friday, March 22, 2013