Stories from the War Hospital - the play

An intimate and moving evocation of the suffering and courage

I was frankly amazed that they managed to hold the seventy-strong audience spellbound for sixty minutes during a very imaginative, innovative performance which brought the personal (and true) stories to life. It was indeed a very special experience.

These are just three of the many outstanding comments on the presentation accompanying the launch of Stories from the War Hospital researched by Richard Wilcocks, Secretary of Headingley LitFest, with the support of funding from the Heritage Lottery Fund, over the past year and a half.

Nurses and volunteers, Royal Army Medical Corps, bereaved parents, casualty clearing station staff, soldiers wounded by shot, shell and gas, stretcher bearers, maids and uniform makers … we had them all on stage by turns in an imaginative production that used effective, minimal props but maximum talent for an intimate and moving evocation of the suffering and courage.  The book gives many more stories and much more detail, including the Vedettes on p145.

Three very talented young performers from LeedsMet – The Vedettes - supported the dramatic representation of just three of the many local stories that Richard has brought to life in script, show and book.

Katharina Arnold, from Vienna, whose first language is German, was perfectly cast as Dorothy Wilkinson, the musical daughter of a German mother and an English father.

Richard himself, like the Vedettes, skilfully took on a number of roles - Lt Col Harry Littlewood, a vicar, the musician Charles Wilkinson, a maxillofacial surgeon - that kept the pace and the stories flowing. 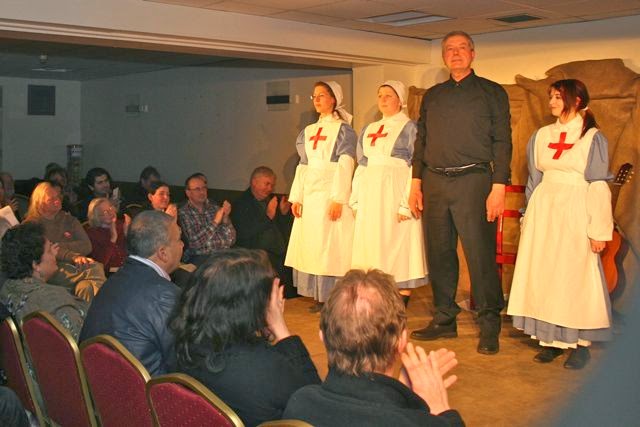 I have never before seen the concert room of the New Headingley Club so well set up for a performance, with a wooden apron stage erected in the middle of one of the long sides, backed by hessian-draped flats, and a really professional lighting rig. Richard Wilcocks, who wrote the book which was being launched, provided us with a kind of entertaining prologue in which he outlined the research which has taken place over the period of about eighteen months, and read for us one of the briefer articles - Help! Help, it's cold! - which was taken from a 1916 issue of the British Journal of Nursing. This made people laugh and put them in a good mood for the show, which began soon afterwords with guitar music from Katharina Arnold with a hint of melancholy in it.

The hour-long play which followed gripped the audience throughout. The action in it takes place at the Second Northern General Hospital at Beckett Park, at the Boston Spa home of Dorothy Wilkinson, at a suffragette rally, at a musical evening in Leeds, at the Second Battle of Ypres, at various Casualty Clearing Stations, in St Chad's Church, Headingley, on the Hospital Ship Formosa and at the Battle of Arras. We got all that, very convincingly, in just over an hour of performance.

All the actors were strong: Katharina Arnold had a powerful stage presence as Dorothy Wilkinson, the suffragette daughter of a musician, Hannah Robinson was particularly effective when she played the spectre of the dead, shell-shocked Captain Pickles and Charlotte Blackburn was the perfect matron: I was really moved when she told us about the tragic cases she had helped to treat after the Gallipoli battles. Richard Wilcocks, the author on stage, was obviously born to be a lieutenant-colonel in the RAMC.

I would love to see this little theatre group again in the future, and I do hope that they will put on Stories from the War Hospital for at least a second time. I am wondering whether they will be performing it in the hospital itself - that is, in the Headingley Campus of Leeds Metropolitan University. I do hope they have been invited.


For a copy of the book: headingleyhospital@gmail.com

Poems used:
Schtzngrmm is by the Austrian ‘concrete poet’ (Lautgedichte) Ernst Jandl.
Pluck is by VAD nurse and poet Eva Dobell.
There Will Come Soft Rains is by the American lyric poet Sara Teasdale.
Dedicated to the RAMC is by the ‘Pack Store Party’ and appeared in the Journal of the Leeds Territorial Hospitals in December 1917.

Thanks to Performing Arts at LMU for making rehearsal spaces available. Special thanks to Oliver Bray.

Spellbinding show that revisits the time of the wounded and nursing services in the Great War.

I believe that the piece was very good, especially I like the way of representing the stories by various ways and techniques.  Thank you.

Often poignant and moving.  Extremely well acted and mostly well articulated.  Not always easy to follow the transitions between people and phases but a very well worthwhile experience.

For just four actors, amateurs at that, to sustain interest in, and convey the many varied emotions involved in telling the complex story of a war hospital, with humour and without any props, was a remarkable challenge but one which they successfully pulled off without noticeable flaw.  I was frankly amazed that they managed to hold the audience spellbound for sixty minutes.

I particularly liked the use of a hospital clipboard, which enabled extracts from letters, newspaper clippings and other items to be read out with style.

A great performance and very insightful.  I didn’t know about Beckett Park Hospital and I am so grateful that Richard has worked so hard to research this past that definitely shouldn’t ever be forgotten.

Very well performed play.  A brilliant glimpse of what will be a great read.  Well done Richard!

Thank you for a moving performance with excellent music and songs.

The set - just folds of sacking at the back of the stage and a red-painted chair - looked great before the show even started.

What an amazing amount of detail to remember!  Very powerful drama, told through the eyes of people who did experience WW1.  I had three great uncles who were killed between 1916 and 1917 (one on the Somme) a grandfather who was a patient at Beckett Park and I studied there (1979-83) so found the performance very interesting and informative.

Wonderful!  Very absorbing, moving with a touch of humour

Sterling work!  The ensemble really brought the stories to life and provided a reminder of the work done by so many ordinary staff during the war.  A really enjoyable evening.

A vivid reproduction of three true stories of hospital life in WW1.  A wonderful acting quartet – look forward to seeing them again.

An intimate and moving evocation of the suffering and courage.  Many thanks

Very good group effort managing to convey the horror of the war but also moving and humorous at times.   I like the music and movement, well done!

Spirited performance. Hope it will be retold elsewhere after all the work that’s gone into it.

Had heard a little about the hospital and stories before from Richard.  The performance really brought it to life, both the ordinary and the extraordinary and tragic.  Very interesting and well done.

I attended CL&CC 74 to 77 and was aware of the history of the college whilst training as a teacher, hence my interest in coming tonight.  Well researched  rehearsed and performed play – very informative.

Nurses who 'did their bit' should be fully remembered and not taken for granted. I am a nurse, so I felt really involved in this terrific play! Well done Vedettes!