Richard WIlcocks writes:
Once more , the annual event involving the Osmondthorpe Hub Writing Group and Headingley Creative Writers took place in the Shire Oak Room at the HEART Centre, beginning at 11 am on Tuesday 19 March. The room was full- and heaving with talent. 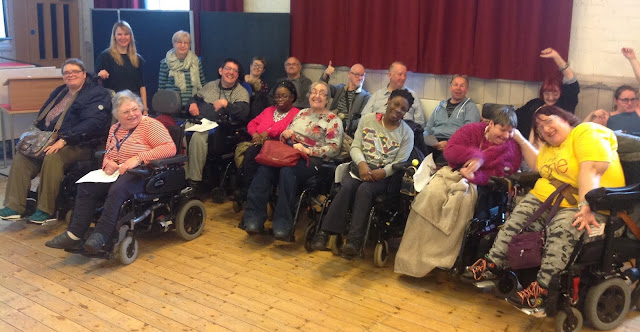 Osmondthorpe came first. The group's inspirational leader, Maria Stephenson, told us that everybody was overjoyed to be back in Headingley - 'It's one of the highlights of the year!' This year, everyone has been writing autobiographically. Speaking chorally, they delivered a poem which began:

We are inspirational when all together,
Planning and writing work that is clever.

Julie Conroy read a piece about how proud she is of her godson Ben, the eldest son of her best friend: 'I bought him his first legal pint when he was eighteen... and took him to his first ever film - Teenage Mutant Ninja Turtles'.

Lisa Daniel sadly died a week before the event, but her work was read out for her by volunteer Hazel. Lisa wrote, 'My biggest wish for the future is to go on endless shopping sprees...  Make sure you shop till you drop'.

Lee Roley wrote that he's love to be famous, and that his proudest achievement is to be living independently. Hea ddded, 'My mind is inspirational, which makes up for me not walking'.

Paul Bugler wrote that he had now reached a good age and that he is still able to live a good life. He is proud that he can still walk a good distance and play golf.

Even with the help of a microphone, Sue Heath's voice was faint, but her childhood memories were clear. Telling us she hoped to be famous, she said, 'I would like to write like Enid Blyton. My characters would go camping like I did when I was a kid...  They might go birdwatching and look at the seabirds such as herring gulls, kittiwakes, terns and puffins, just as I did when I was ten years old'

Lianne Rhodes advised us that, 'It's who we have in our lives, not what' and told us 'I love singing and partying and shopping and am proud of when I did work experience.'

Pam Robinson put a spotlight on her friend David: 'I am proud of the fact that I can get into public transport independently. My boyfriend David helps me. I go to town and to the White Rose Centre. I do not know what I would do without him.'

Colin Monaghan wrote about being polite and considerate, assuring us, 'I suppose I have got the type of face that most people find non-confrontational' and advising us, 'Try not to be too short to the person you are talking to.'

Julie Bell said, 'I like writing stories for children and want to write a book one day about puppies and kittens...  My biggest wish is to live near my sister, Susan, and her family.'

Amina Braimah wrote about going into supported living and about her contentment living in Terry Yorath House.

Paul Jeffrey said (through Maria, who read from what he wrote) 'My greates talent is gardening. My wish for the future is to have my own greenhouse and grow lots of flowers and tomatoes'. Paul's great loves in life are going on holiday in Bridlington and meeting friends who can use sign language.

Jenny Ruddock's greatest achievement is getting a place of her own - 'I fought for it!'

Mandy Hudson wrote 'I loved doing work experience at Leap One'. Her 'piece of wisdom for the world is to go on lots of holidays'.

Gaynor Chilvers loves 'sitting on the stage, hearing the audience... acting is something I enjoy/ Showing I am as equal as you/ Wishing people would see me as me/and not just my disability!'

Jane Moody revealed, 'I was once told, when I was a child, that I wouldn't amount to anything. The teacher who said that turned up on a course I was leading on Change and Disability Awareness. I showed him that people using wheelchairs can do anything they set their minds to!'

The traditional cake break was in the interval. This was particularly welcome, with all varieties of cake consumed enthusiastically. The Victoria sponge made with the help of a recipe by Delia Smith was notably impressive. 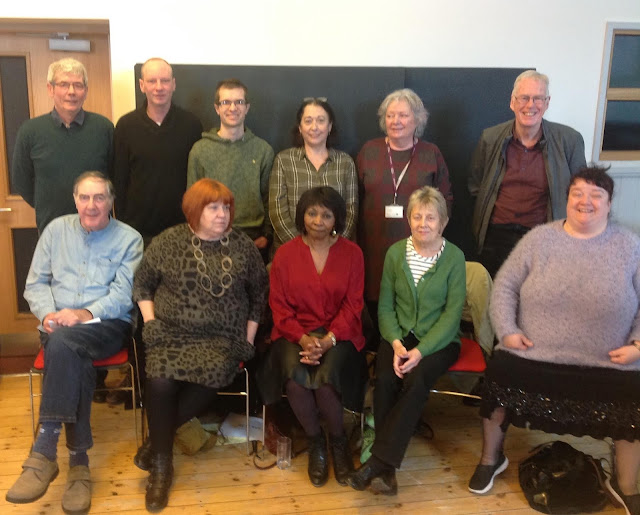 Headingley followed, the performers introduced by tutor Liz McPherson. The theme was 'Change'. Liz described her group as 'incredible' and reminded us that it was a writing group in the Workers' Educational Association, which had a proud tradition of providing adult education.

Julie Jones explored the various connotations of 'change' - for example the change in your pocket, Climate Change, the changes in her own life. Her underlying message was 'always look for the goodness in people'

Howard Benn's first appearance was to tell a story with a mystical feel to it, about a girl called Eunice who makes a dress of 'all the fabric of the Universe'.

Karen Byrne's 'Transformation' is an observation on life and its randomness, her dominant image that of a a creature spreading its wings after breaking out of a cocoon.

Cate Anderson's substantial story 'The Wedding' was inspired by a scenario presented in a classroom by a fellow student. Its central character is Doreen - 'a sister-in-law from Hell' - who is the person you do not want to sit next to at the reception. Cate speaks as the narrator: 'We are polite, but it's nothing we can keep up for long'...  'We're cordial. Then she starts!'  Cate should write scripts for television.

Bill Fitzsimons gave us two short poems, as entertaining as ever. 'Redesigning' is inspired by 'The Illustrated Man' by legendary Science Fiction writer Ray Bradbury, a collection in which the most memorable character is a heavily tattooed vagrant who was once in a freak show at a circus. Bill writes about 'the virgin canvas of my body' and notes 'every day, another line is drawn' as 'a hieroglyph snakes sinuously around my left leg'. His second poem, 'Dream' is about a cat: 'If I were a tom cat, she would be my queen'.

Marie Paule Sheard, told us she had come on this year, overcoming fear to write a villanelle, a nineteen-liner, 'By the Edge of the Shore'. It's about how the landscape can change hour by hour'. The poet is 'waiting for the one I adore'.

Barbara Lawton's 'Troubadour' is about a a less-than-wealthy street entertainer she had encountered in Mantua, Italy. A woman with an accordion played with puppets attached to her feet by sticks, in shop doorways.

Jim Mullins's 'Final Doorstep Delivery' is a nostalgic poem about a type of milkman now, unfortunately, rarely seen in our streets in the early hours of the morning.

Myrna Moore chose a famous character from literature to put into a modern setting. Named 'Guilt', it is about a woman who lives in 'Duncan House', where 'an unwelcome guest has come to stay'. She walks about in the night, moving her hands as if washing them and exclaiming, 'Out, damned spot!' We scratched our heads over that one.

Dru Long threw caution to the winds to write about 'the change we're all going through now', in other words B***** She advised us, like Mr Speaker, to 'look back in our history and see how discord leads to war'.

Malcolm Henshall, who is usually known for cheerful narratives, chose to be sombre, basing his story on the tube journey on the Northern Line in London, to be specific the daily journey of a commuter called Philip who hates being crushed up against his fellow human beings in a daily commute between Morden and Moorgate. It takes him many years of daily torture before he reaches the day of his mutual suicide pact with his wife, but then...

Matt Button's lyrical poem 'Shifting Sands' has cliffs falling into 'a roaring southern ocean', a 'sun which cracks open the parched earth' and in which a tsunami 'beckons the unwary to watery graves'.

We'll do it all again next March!