Don Jordan’s intriguing talk on Charles II’s private life (if it can be called private given that Charles’s conquests were the celebrity gossip of the day) was filled with plenty of scandalous detail to keep the audience hooked. From his youth spent in exile as a king without a kingdom, to his eventual death probably from a stroke, Don explained how many of Charles actions throughout his life were driven by his voracious sexual appetite.

He connected the amount of influence Charles’s many mistresses had over him with England’s economic problems. The financial struggles faced by the country as a result of the King giving them so much money eventually lead to covert deals with the King of France, who gave money to Charles in exchange for military aid and on the condition that he become a Catholic.

The enormity of power and influence that the Merry Monarch’s mistresses had over him show indeed that the women who had power over the King in bed also had power to impact the public and political affairs of the country.
Don decided that the King redeemed himself towards the end of his life, through refusing to divorce his wife despite her inability to bear him children, meaning that he died without a legitimate heir. But does this truly redeem his actions throughout his hedonistic reign? Don left it to the audience to make up our own minds.

It was fascinating to find that many of today’s royals descend from Charles’s many illegitimate children, so that when William ascends to the throne after his father he will become the first King to have blood from Charles II, through his mother Diana. As Don said, without the King’s sexually driven actions English public life would not be the same, which shows that Charles, and indeed his many mistresses, have influence on the country even today. 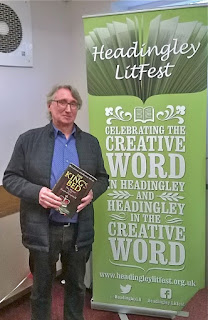 The King's Bed was a hotbed of intrigues, quite literally, according to Don Jordan in his highly entertaining talk over the tea and homemade cakes in the New Headingley Club. Charles II he would become, but as a fatherless youth who was exiled in France and lived with his mother, he became rather directionless and dissolute.

His first sexual experiences as a boy were with his .. wetnurse. And it didn't really get any less salacious after that. His time as a 'king over the water' did not turn his mind to statecraft or politics, more to a playboy's life, a love of roistering with friends and satisfying the more earthly pursuits, including sailing and gambling. He was eventually invited back to England to become king after the failure of the Cromwellian regimes, and spent two decades steadily asset-stripping the Treasury, the Navy and Louis XIV of France to supply his many, many mistresses with jewels. And titles. And palaces. £150,000 in one year went to the first major mistress Barbara Palmer – today's equivalent is many millions.

As our jaws dropped, Don treated us to not just the (lengthy) list of his conquests – Nell Gwynn was just one of so many, though he did seem to have a great affection for her erotic skills – but also to the disastrous results of his inattention to the affairs of state and his close attention to his affairs. Poor Queen Catherine, his Portuguese bride brought in to secure the succession, was unable to deliver a full-term baby and it may well be that the special treatment of royal pregnancies with quinine was to blame as it is now known as an abortifacient.

When he finally died, probably of a stroke – with his lifestyle, no surprise; he was with two of his mistresses the night before - he asked for the last rites as a Catholic, left the throne to his avowedly Catholic brother James and left more problems than solutions.

His many illegitimate children – most of whom he happily acknowledged – are now represented in today's high-born notables. When Charles III finally accedes to the throne, he will find his wife Camilla has a far more direct link, coming as she does from the line descended from Charles II's French mistress Louise. Ironic. It is when William finally gets to sit on the royal seat, he does have royal blood from Charles II through his mother Diana Spencer (descended from both the French mistress Louise and the first mistress Barbara whose families have intermarried). As Don said, “The King is dead, long live his genes.”


Don was talking about the book he co-authored, The King's Bed: Sex, Power and the Court of Charles II

Very fascinating, make me want to know more and more. “I like a bit of gossip.”

Very interesting. Learned lots of new things. Thank you for an engaging talk.

A very successful resume of the times

Some delay owing to techno probems. A fascinating talk on Charles II by the co-author of an amazing account of royal depravity and quite loathsome behaviour towards women and the welfare of the English nation