Glimpses of our past

The meeting room was, what's the word.......august......that's it. Appropriate for the occasion. Lots of oak. It was filled with appreciative people as well, there for Poetry at the Brotherton. I had no idea the room was there when I was a student at Leeds University: the Brotherton was mainly for revision before Finals, directly under the pantheonic dome. Well, here we all were, survivors.

The readings began at 8.30pm after an informative introduction from Chris Sheppard from Special Collections, in which he told us about the illustrious line of Gregory Fellows and the benign influence of Professor Bonamy Dobrée. Most of the names mentioned were from before my time at the university (I first came across Bonamy Dobrée's name on my reading list - Restoration Comedy, I believe) and I looked at my fellow readers - Jon Glover, Doug Sandle and Jeff Wainwright - with a certain measure of smugness, because I was the youngest amongst them. Not often I can say that nowadays.

Congratulations to Doug for doing most of the organising for this successful event - and also to Kathryn Jenner, the guardian lioness of Special Collections.

I read a selection of poems by Geoffrey Hill (English Department staff 1954 - 1981), who was my tutor in 1967 - 1968, beginning at the beginning with Genesis and finishing with Tristia: 1891-1938, A Valediction to Osip Mandelstam. I had to edit out so much from the initial list: I would have loved to have said more about poor Mandelstam, for example, who was killed by Stalin, who had himself been published as a (Georgian nationalist) poet in his early years just after he left the seminary. I had plans at one stage to sing something by John Dowland as well.

Doug Sandle produced more laughter than me, first with his selection of poems by William Price Turner (Gregory Fellow 1960 - 1962) whose University Vignettes were hilarious, then with a selection of poems by Martin Bell and himself. I felt strongly for  Bell in his From the City of Dreadful Something, and particularly remember Doug's poem The Stone Gatherer, which is dedicated to Ken Smith and his son on their first visit to the Isle of Man. Doug tells me that pruning back the first list of choices was difficult, but we couldn't have gone on until midnight.

Jon Glover remembered a sit-in which I had mentioned earlier, which took place in the Parkinson Court in 1968 to protest against the university security men, who had been taking the names of students holding up placards with various messages about the Vietnam War, but his main memory was of the extraordinary Jon Silkin (Gregory Fellow 1958) who had founded Stand magazine in 1952, and whose early career had embraced teaching English as a Foreign Language  and gravedigging. Jon Glover is the current editor, and copies of the latest issue were on sale at the event. He read The Coldness, by Silkin, which is about the pogrom against the Jews of York in 1190 - a poem I remember from many years ago. Poems by Glover included the excellent CERN: Frontiers, Grave-Diggers.

Jeff Wainwright (student 1962 - 1967) reminisced as well, and spoke of Geoffrey Hill, about whom he has written seminal essays. He mentioned his great attention to detail - every word matters, none of them are for the wind, proofreading is inevitably important - and the fact that he was a good and sympathetic tutor to most, leaving his mark on many. I agree. He read a series of short poems by himself, and also by Ken Smith, a poet I had previously (misleadingly) characterised in my mind as 'non-difficult'. Jeff had driven up from Manchester to be with us.

Below - Jeff Wainwright and Jon Glover. 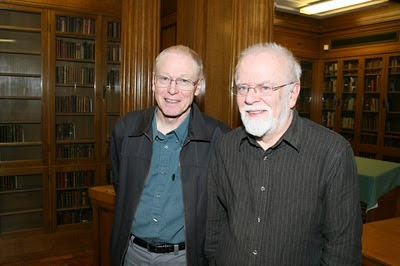