Dig deep to mine gold

Sally Bavage writes:
Lawnswood Poetry Slam yesterday (Thursday) evening was, once again, a heart-warming affair attended by a packed crowd of friends, family and supporters.  A slam features a broad range of voices, styles, cultural traditions and approaches to writing and performance. We got that range.
Welcomed in to the school hall by the talented Lawnswood Steelpans band, Amanda Stevenson, Head of English then introduced us to our compere for the night.  Local performer and poet Michelle Scally-Clarke came yet again to lend her support to this extraordinary event. Her own poetry lays bare her turbulent journey from care, to adoption, to motherhood, to performer – and she encourages the teenagers who go to her preliminary workshops to dig deep and find their own ‘Sense of Self’. She worked with the students for six weeks before the slam, nurturing their talents and offering them her own inimitable style of encouragement. Her hard work paid off. She mined gold.
Extraordinary?  Yes! To hear so many young people talking about their sense of alienation, angst, loss, love, abuse, sadness, differences, families, gangs, revolution .. was a stunningly powerful experience.  And not just talking either.  Some found singing, or rapping, even to their own musical compositions, a way of releasing their innermost feelings and thoughts.  To see the determination on the faces of those on stage, sometimes with shaking paper betraying their nerves, then see them changing visibly as confidence flowered and the power of their own words took them on a journey to a place where they were heard and respected – that’s what made it an extraordinary night.  Some were just on the brink of teenage, others were old beyond their years, but a cross-section of boys and girls from all walks of life were bound together by their commitment to ‘be heard.’  Or be seen – the dance troupe who welcomed us back for the second half were a visual version of showing the power of the words to which they danced.
All the ‘slammers’ received medals for taking part, and received the applause, whoops and hollers from an appreciative crowd.  Three special performances – for Best Performance, Best Poem and Best Personal Achievement – were awarded. Thanks should go too to the judges Richard Wilcocks (Headingley Litfest), Richard Raftery (staff) and Priya Lota (Slam Champion 2010) as well as Stella Litras and Jegbe for the musical support.  All the names of the performers are given below but credit must be given to Michelle Scally Clarke, who managed to inspire such confidence from these young people that they laid bare their ‘inner well’ of honest confessional.  A night to remember, for performers and audience alike.
Theo Bennett
Toni Busby (Best Performance)
Kirsty Crawford
Imogen Chillington
Amy Dawson
Fatima El Jack (Best Personal Achievement)
Polly Foster
Kieran Gately
Tanaka Guzuwe
Jasmine Joseph
Eva Moran
Teo Nistri
Ruvimbo Nyakubaya
Joel O’Mara (Best Poem)
Dione Sheehan
Zoe Kempe Stanners
Shannel Tata
Rosa Weiner
Huanna Witter
Richard Wilcocks adds:
Every year the thought crosses my mind that the most inspiring poets and singers of the entire LitFest can be found at Lawnswood School, at the Slam. This year, the thought was particularly strong. So fresh, so unpretentious, so spontaneous!


Fatima’s poem about the Arab Spring, or to be more exact, the Egyptian Spring, with its audience participation, was simply astounding, bringing a whiff of the hope and excitement in Tahrir Square in Cairo, Toni’s rich alto voice and her ability to convey real emotion in her own compositions made me think that surely she will be famous one day, and Joel’s honest, open and kind poetic attitude put many adult versifiers to shame. But then, all of the contributions were more than worthy of praise.
Below, Michelle Scally-Clarke with three award-winners: 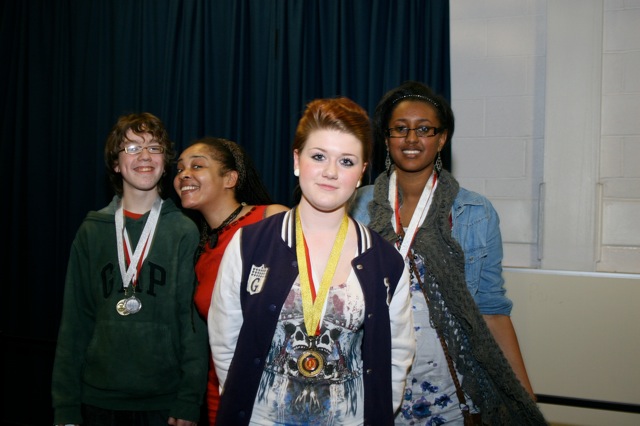