Songs about love and shipwrecks 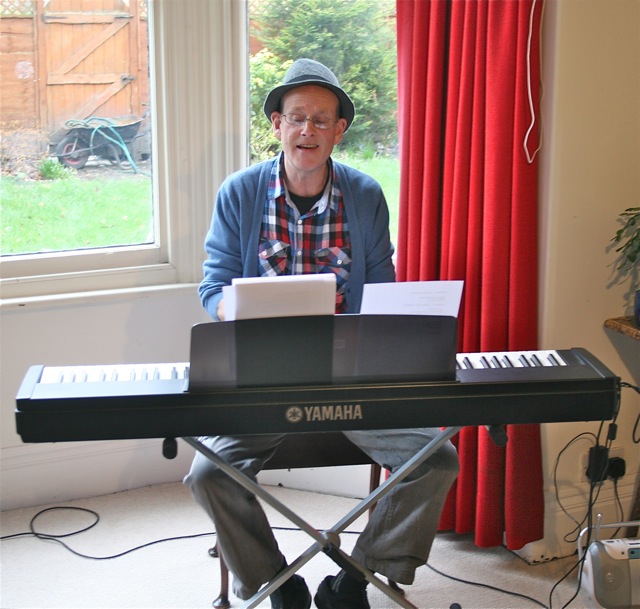 Richard Wilcocks writes:
There was far more love than shipwrecks in this event, the first of those held in people’s houses. Backed by a window framing a sunny garden scene, Peter Spafford read his poems and sang his songs with aplomb, displaying some of his many talents to excellent effect. He began with a poem inspired by a graveyard visit, and also by a recollection of Stanley Spencer’s 1926 masterpiece The Resurrection, Cookham. Tombs were flung open and the dead became quick as Peter asserted a passionate love of life which became increasingly apparent as his one-man performance progressed.

He sat at the keyboard to tell the story of a doomed ship in Cornwall, then moved on to the necessity of writing things down:

That idea you had yesterday
Write it up, write it down......
Because the ink of memory runs thin in the rain

He sang about love, then moved away from the keyboard to read about it: “These are love poems in a very broad sense,” he told us. He speculated on the origin of the name of the Hello Bridge which crosses the River Cover in the Yorkshire Dales. Did lovers once meet there? Yes they did, centuries ago.

My favourite was a song which seems to have come from a viewing of the film Waterloo on DVD, the version starring Rod Steiger as Napoleon. Two farms were destroyed in the battle – Hougoumont and La Haye Sante. Tacticians might focus on how one or the other was crucial to holding the line against the Bonapartist forces, but Peter Spafford focuses on two lovers who grew up around them. He sang partly in French to a French tune – Jean Petit qui danse – and ended with there’s rubies in the dew. Beautiful!

Towards the end of the session he was flipping through a ring binder containing the brief poems he has written for every year of his life, which I recognised from when he was in Café Lento a couple of years ago. He invited audience members to call out a year. 1968 brought forth a bearpit, 2005 a view from a high point in the Malvern Hills, 1973 his loss of virginity (in a dream, to an Indian goddess in a church), 1995 a delicious strawberry eaten in Portugal, and 1963 the death of his dog Bilko, when he (Peter) was seven years old. “Were you seven when you wrote that, daddy?” came a child’s voice.