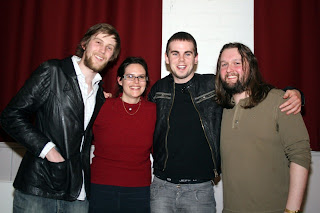 You could feel the electricity in the Shire Oak Room as talented poet after talented poet impressed us, introduced by the efficient Jo Brandon, all of them from the Cadaverine stable. In the photo, see Ian Harker, Amy McCauley, Joe Hobson and Mike Honley. Young blood!

First Joe Hobson read us his selection, all of it tightly-structured, jammed with taut metaphors and startling word-choices. He struck me as a domesticated, rural sort of person, closely observing fuchsia bushes in the garden - touchstone scrolls against all that night.....we blink in full view - and looking at a garden spider as if it was a newly-discovered creature - his many legs folded in his terminals.... towing some memory up a thread - and also as someone who can capture a character in a few words – I’m dizzy as a teaspoon...  all buttonholes, no buttons.

Ian Harker started with a real tree which had been cut down by his neighbour, then moved on to an invented fire tree. After fire came earth, a Bronze Age earthwork by the sea which fascinated him, dug out laboriously in ancient times – the earth struggles, and we fight it back. He referred to the mysterious Wodwo from Sir Gawain and the Green Knight, and returned to Medieval times in a poem inspired by an aerial photograph of his parents’ house which revealed marks and shadows in the field next to it – evidence of feudal strips. I liked this one best.

Amy McCauley, who is doing a Poetry MA at Manchester Met, produces short, very short poems, many of them with a Biblical link of some kind. Mary, Mother of God appeared several times, seen from very original viewpoints. I liked her thought that a cow would make a good pope because life should be taken slowly. Birth and conception was a theme, and also the Immaculate Conception – the pearl is formed and released by the dark spring. Another theme was family, with poems to a brother and to parents. She also mused on reaching the age of thirty... no comment.

Mike Conley, a twenty-six year-old teacher, reminded me in his images of the legendary Ivor Cutler (did he listen to him on the legendary John Peel radio programme?) but his delivery was all his own as he gave us a surreal narrative (Aquarium) set in an A&E involving a tank of goldfish. I really liked Ophelia’s view of Hamlet (he taught Hamlet to his Year 8 students) and his revelation that she had her lady in waiting drowned so she could go to her own funeral. This was in the form of a discovered letter signed ‘Mrs O. Fortinbras’. 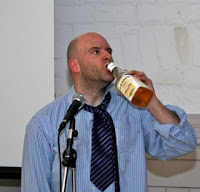 After an interval involving, so it seems, plenty of networking, King Ink appeared, first of all in the figure of Michael Hann waving a whisky bottle filled with what may have been more than cold tea. He was a sort of cod lecturer raving about the split between Freud and Jung, complete with sanctimonious statements, platitudes and bits out of psychology textbooks. He was at his best when not stumbling about too much, when we could pick out something relatively sober from what became a deliberately incoherent dream sequence.

I was occasionally reminded of a more nightmarish Samuel Beckett, but perhaps that was not the intention. He was followed by John Chadwick as a burlesque mime artist, with a beautifully rubbery face and a mobile beret. Broadcast platitudes and exhortations connected with democracy, the rights of consumers, being independent in thought and much else were accompanied by frantic mouthings. Gute Nacht! Gute Nacht my sweet little demographics! said the background voice as the mime disappeared. Right.

The third apparition also harangued us. This was Tim Marshall as an ostrich-feathered, turbaned Russian professor (oh these damned foreign intellectuals!) with a stream of condemnation and advice – sooth yourself with twenty-four hour TV... beware of greed economics and botched sociology! We were urged to watch out for the use of Freudian ideas in any focus groups we might be invited to join, and watched a Powerpoint full of subliminal suggestiveness, with quickly-flashed images of, for example, a cut-off limb, a Hitler rally and paintings by Joan Miro and Francis Bacon.

It was a wild pantomime, a bit clunky and ready for revision – this was its premiere – but rather wonderful. King Ink can come again!