How do you picture an author?

Richard Wilcocks writes:
Bob Swindells, the author of Stone Cold, Abomination, Brother in the Land, Daz4Zoe, Follow a Shadow, Room 13 and much, much else read from his work and answered questions from about two hundred Year 9 students at Cardinal Heenan Catholic High School yesterday (Wednesday) morning in an event described by Assistant Head Cathie Brown as “a triumph”. His audience was wonderfully attentive as he read from Room 13, which he later said was his favourite, and ready with questions of all kinds when he talked with them for more than an hour afterwards.

The students were probably most familiar with Stone Cold, the story of Link, a boy from Yorkshire who tries to find work in London but who becomes homeless, and who is then stalked by a serial killer. He spoke about how he had done the research for the novel, writing to organisations like Shelter and actually spending time wearing shabby old clothes sitting on a bench at night amongst real down-and–outs by the Thames. He had encountered some callous, even dangerous people, but also some kind ones, like the man who had walked past him carrying a takeaway meal, who had turned back and left it beside him without saying a word.

“I took ideas from stories in the news, and was thinking of Dennis Nilson, who murdered a number of young people in his flat.”

I asked him whether he was still got at by tabloid journalists for his choice of ‘strong’ subject matter. I remembered one particular screech from someone at the Daily Mail along the lines of “What are we doing to our children?”

“Not so much nowadays,” he said. “All of that happened when I was awarded the Carnegie Medal for Stone Cold. I am not usually that high-profile. It does not bother me.

I am often stimulated to write by things which make me angry, like the fact that there are homeless teenagers sleeping in doorways when there is no need for it. I am angered by the existence of nuclear weapons as well, and the mad threat to use them.”

He talked about when he was arrested for taking part in an anti-nuclear protest which involved getting chained up with others, then padlocking the chains to gates outside the Ministry of Defence. The police cut him free using bolt cutters. When he refused to pay the twenty-five pounds fine (those were the days!) he ended up in Armley Gaol. This was an extremely interesting tale for the audience, with plenty of follow-up questions. An author in a prison cell!

“I don’t know how you picture authors in your minds. Perhaps you think of someone wearing a dressing gown and drifting about the house with a cigarette in a long holder.”

Bob Swindells has officially retired from school visiting, so it was terrific that he agreed to come over to Leeds for the Headingley LitFest. He was much appreciated by the students and teachers. 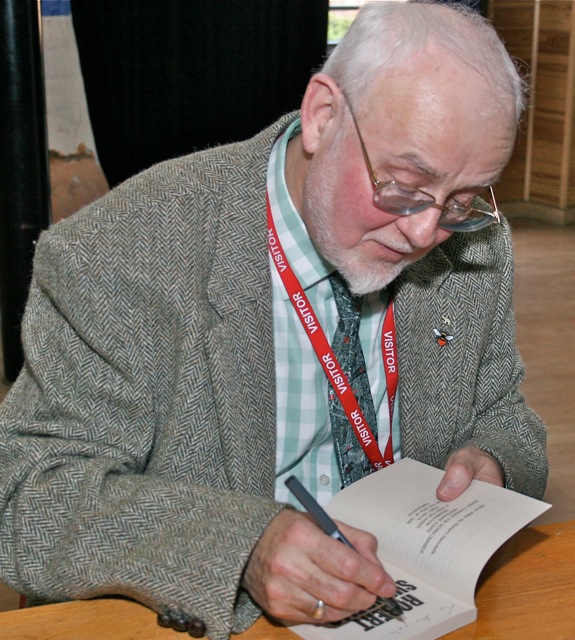 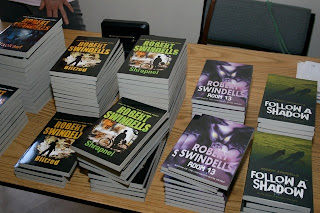