I'm Waiting and Come Gather Round


John Zubrisky writes:
A pause in Pinter is as important as a line. They are all there for a reason.  Sir Peter Hall

Local thespians Theatre of the Dales followed the advice of Hall while bearing Pinter’s comment in mind. The importance of pauses and silences can be exaggerated. Nothing was overdone in the first half of this brilliantly entertaining evening in the performance hall of the New Headingley Club, which was played for laughs at first. Pinter tended to dominate the first half of the programme – an extract from The Dumb Waiter introduced a heavier and more sinister tone after the merry banter which was part of a counterpoint strategy to balance what had come earlier. We saw an aspect of London’s underworld which Pinter knew about from his childhood in the East End.

The evening began with a series of short double-act scenes from movies, old vaudeville exchanges and a chunk of Sam Beckett’s Waiting for Godot which many would describe as comic, involving David Robertson and Will Tristram in battered derby hats as Vladimir and Estragon. The bulk of the tragedy was not there, because Pozzo and his slave Lucky were not there – that would have been too much for this compilation, which was apparently put together specially for the Headingley LitFest. How wonderful that an enterprising local literary outfit can commission items like this.

In the second half, the comedy drained away, because Albee’s The Zoo Story is pretty scary for me. David Robertson was Peter, and his New York accent was convincing even for me. I’m from California and I know they speak like that over there. Guillaume Blanchard was a Jerry (the guy that dies at the end) with a French accent – you do get those in New York. The acting was top-notch, and would have warmed the heart of any Method teacher if he or she had been there.

Now I am waiting for another shot of this stuff. Do I have to wait until next year or will the LitFest provide us with more quality drama before then? 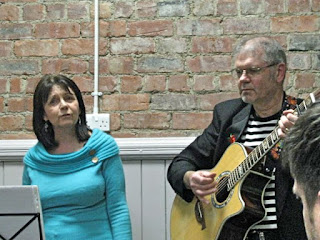 On Wednesday 21 March, Come Gather Round attracted a full house of thirty plus in an upstairs room at HEART, which was a more appropriate environment than the larger advertised Shire Oak Room. In a cosy and folk club atmosphere (although the café would have been an even better setting) poet, comedian and musician Richard Raftery and his folk group Powder Keg entertained and engaged a very appreciative audience. The programme was introduced with the title Small Towns, Hard Times and Big Dreams, and the songs, stories and one liners drew upon that theme.

The songs and music, generally of Irish and American provenance, were very enjoyable and surprise guest, Irish folk singer Seamus Markey, was a very good contribution to the evening. I was particular pleased that songs by some of my favourite folk artists were featured in a very well chosen and balanced programme that included songs by Iris DeMent, Gillian Welch, Steve Earle, Christy Moore and Pete Seeger. The story and song of the Australian Bridal Train was however new to me and I suspect to most of the audience. The background story of the American Government’s sponsored train that collected GI brides from around Australia for a one-way free passage to the United States to join their husbands was an interesting and moving tale well told.

While a couple of his target subjects might well have raised an eyebrow or two, the poems and humour of Richard Raftery generally entertained us with his Liverpudlian tones and local stories that spanned both sides of the Pennines and which were delivered in a congenial and a sometimes gently self-deprecating manner.  I was impressed when he recounted that he had worked for a time in the Big Apple – but which turned out to be more locally in Bramley!  All in all this was a pleasant night's entertainment and a success for Leeds Combined Arts and their partnership-contribution to the LitFest.