Richard Wilcocks writes:
If priests could be as constantly, persistently entertaining as Ian McMillan, they would have no problems filling churches. People would come early and sit sleeplessly at the front, every week, and their responses would be toothy grins, laughs and sporadic shouts of recognition. He held us yesterday evening for an hour and a quarter, and we writhed with pleasure as he walked, hands flying, in front of the crossless altar in this magnificent, deconsecrated church in Cardigan Road, which still retains its name - St Margaret of Antioch - but which is now known as Left Bank Leeds, an award-winning venue for music and the arts brought into being by a group of hardworking volunteers, when the alternative would have been a decline and fall.

Ian McMillan is what a stereotype of a Yorkshireman should be, not a 'vinegar-faced' and narrow-minded character (like Joseph in Wuthering Heights?) but really friendly, warm-hearted and, yes, homely - the sort of bloke you wouldn't mind at all eating at your table with, or watching the match with, unless, of course, if it was Barnsley thrashing Leeds 5 - 2. He's the exact opposite of crabby, and he lets the imagination take the initiative.

He goes far beyond the homely and you only notice this afterwards, when you recollect his words in tranquillity. He transcends Darfield, you might add. Universal themes are in there. Love and affection?

To select gobbets of delight from his programme, in which well-worn, endlessly hilarious material (like his observations on new pupils in infant schools) was mixed with the newly-created, I would fish out his nursery rhymes, in which words are randomly replaced with 'fish', his stories about when he worked on a building site, his mention of Sir Alec Clegg, who founded Bretton Hall College and who ensured that the West Riding Education Authority was the most innovative in the country, and his poems and stories about his mother and her funeral which were so funny, so funny, and so poignant, so poignant. Love and affection.

There was an experimental aspect, because our partners at Left Bank were trying things out, like the new PA system, which did not serve the back two rows very well. Accoustics are always a problem in churches. The cold was kept at bay efficiently, with two gas-powered tubes which fired warm air in to the space for hours before the performance. Choral music should work at future events.

On arriving home at ten, The Verb was on Radio 3, and Ian McMillan was interviewing our guest from last year, Ben Okri. 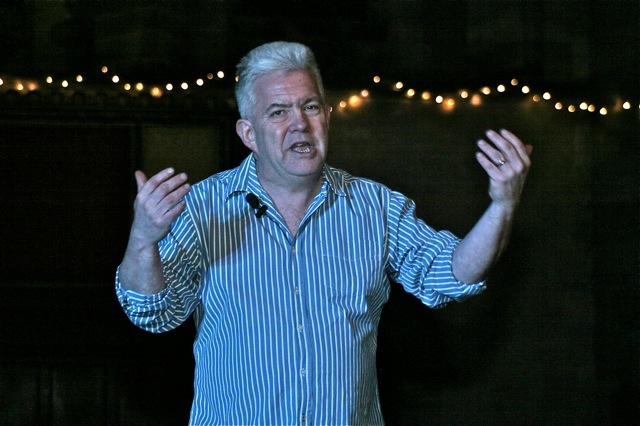