Richard Wilcocks writes:
Perhaps some scholars are still attempting to discover the divine language, the ultimate language. It is difficult nowadays to snatch new-borns from their mothers and lock them up in dungeons with mute nurses to find which language they will develop, or to muster much credibility for a new project to recreate the language of the angels in the apocryphal Book of Enoch, but not that difficult to write a thesis or give a lecture on James Joyce’s Finnegan’s Wake, which has been pored over by great linguists, extensively annotated, shortened and been the subject of innumerable lengthy articles in slim journals. It still sells steadily. Not bad for a work of comic fiction published just before the War.

Watch this YouTube clip of Joyce reading (in 1929) the Anna Livia Plurabelle section. All of his work should be read out loud!

A Shorter Finnegan’s Wake, edited by Anthony Burgess and published in 1966, sold more than the original though. More people had time for that. Dr Richard Brown began with Burgess in Headingley Library yesterday evening. He arrived with student Julia Tanner, who read an extract from A Clockwork Orange beautifully. In fact she went on to read from Orwell, Tolkien and Joyce equally impressively. Burgess’s use of transliterated Russian words was explored (Bog for God, moloko for milk) and his admiration for Joyce was mentioned. Dr Brown pointed out that Russian was a fresh and fashionable language for many in the fifties and sixties. The story of the disaffected, ultra-violent Alex and his murderous droogs, fictional predecessors of the Baader-Meinhof terrorist group perhaps, sold well and was made into a film which was banned. It brought to my mind Ross Raisin’s God’s Own Country (meet the author on Saturday afternoon) in which the disaffected Sam uses words which are taken from Yorkshire dialect, some of them made-up.

Orwell’s Newspeak from Nineteen Eighty-Four was scrutinised next. Predictably (this is a literature festival after all) we did not see the beauty of this ultimate language. I thought of North Korea’s version, the special trick there being to insert the name of the dear leader (Kim Jong-Il or a member of his dynasty) into every other sentence, but someone else pointed out that Newspeak was often used by our own politicians. Those present apparently preferred an elaborate, extensive lexicon.  Wordsworth’s views on poetic language were not mentioned. No time. Charles Kay  Ogden was mentioned though. He was the designer of ‘Basic English’ (BASIC = British American Scientific International Commercial) in which complex thoughts could be conveyed using just 850 words.

Then it was Tolkien and Elvish. On a handout, we saw the great man in a group photo taken in 1921 – members of the University of Leeds School of English standing and sitting on chairs, the women in white blouses and ankle-length skirts, hands clasped on knees. It was difficult to spot a blurred Tolkien. We looked at a photograph of one of the houses in which he had a flat (in Darnley Road) and thought about him travelling down the Otley Road every day to the university, an academic philologist on the tram, ninety years ago, with Sir Gawain and the Green Knight on his mind. A blue plaque is needed.

Elvish, Dr Brown made clear, is a far more scholarly linguistic experiment, not really intended to be a speakable language outside the community of the readership. It contains vocabulary from Old and Middle English, and from Welsh and Finnish. The fact that the language has a definite script adds depth. The diacritic marks on the script indicate the vowels: influences from Arabic calligraphy as well. The language has been extended by various Tolkien societies, so that it is now speakable, and interest in it has burgeoned since the success of Peter Jackson’s film version of Lord of the Rings. I am waiting for the simplified version before I learn it.

We finished with Joyce, who never lived in Headingley, as far as we know... and whose only reference to Leeds was punning (as different as York from Leeds/as different as chalk from cheese) and whose Ulysses will be unsolemnly read on Sunday in Muir Court. Bring your own copy. Julia Tanner proved that she can read Esperanto as well as Joycean, another cause for our admiration:

Dr Brown talked about Joyce’s Italian-speaking household in Trieste (Trst) between the wars, Italian being (only just) the dominant language at the time in the city, closely followed by Slovene. He nearly became an Italian author. He certainly thought that it was possible to translate (recreate) some passages of Finnegan’s Wake into Italian.

We were also shown an extract from Jacques Derrida’s famous Two Words for Joyce.

We could have continued for another hour, but it was not possible. No time. This academic contribution to the LitFest was most welcome. We appear to be establishing a tradition here. Let’s hope Dr Richard Brown returns in 2013, if not before. 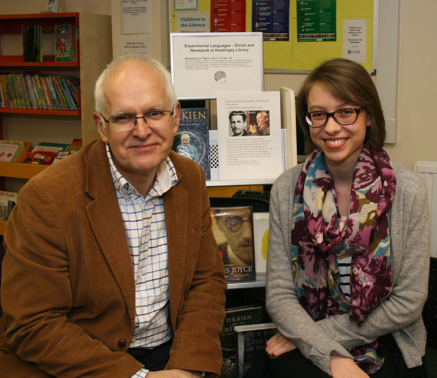