A compère's response. Doug Sandle writes:
“Ladies and gentlemen of this pulsating parish of Headingley, we are proudly presenting a sumptuous stanza of pronouncing poets, a veritable versified evening of lingo-istic largesse to both edify and delight us!”

So the introduction might have been if instead of the Heart café we were at the Leeds City Varieties.  However, I opened with the more conventional "it's my pleasure and privilege to be your host", which on paper seems boringly meaningless, yet in truth it was a genuine pleasure to see a ‘full house’ of expectation and to be able to compère a line- up of poets that in each of their own ‘genres’ were truly talented.

Having outlined in my introduction some of the rich and remarkable poetic historical precedents for the poetic lingo of Headingley and Leeds 6 - for example the likes of Jon Silkin, Peter Redgrove, Martin Bell, Geoffrey Hill, Ken Smith, Tony Harrison and George Szirtes as well as the contemporary buzz of poetic activity and talent taking place in Headingley and district - there was much for our present gathering to live up to. However from the very first warm up ‘prologue session’ that featured a ‘melody’ of expressed feelings, metaphors, images, and human experience and which included three generations sharing a bed, a rather smelly and badly behaved cat, and an account of unrequited ‘commercial’ love in a call-centre, there was no chance that our performers would not live up to such a provenance. Indeed they presented a varied and deeply rewarding experience that genuinely engaged an attentive and very appreciative audience.

The scene having been set, what followed in individual presentations by our poets was a moving, exciting and thought provoking evening that really did stir the imagination, move the soul, lift the heart and engross the mind. Different styles of poetic lingo, different cadences, some more cerebral than others, some more physically engaging, some more challenging, some more revealing and some more poetically fragile - but in their sum total came together to leave a satisfying sense of lingering engagement with what it is to be creatively human and to genuinely communicate with honesty, depth and a commitment to both the power and subtlety of words and both spoken and unspoken language.

While my compère’s  concluding ‘thank –yous’  to Paul Adrian, Lis Bertolla, Fatima El-Jack, Jasmine Joseph, James Nash, Lucy Newlyn and David Tait also look rather stilted on paper, they were nonetheless heartfelt, as quite evidently were those of the audience as expressed in their  final enthusiastic applause and expressions of gratitude.

Afterthought 1:  There was a special added poignancy to the evening with the visit of Lucy Newlyn, whose poems were so evocatively moving regarding her childhood upbringing in Headingley/Meanwood, and who was visiting for the first time the reconstructed Bennett Road School where she had attended as a child.

Afterthought 2: While my stated preference for expressions of appreciation by clapping to be at the end of each section or individual reading, rather than after each poem, was particular appreciated by some of the poets, there was a different view expressed by others, especially by some of the audience enthused by the energetic and thought provoking and gifted presentations by the Lawnswood school poetry slam winners. I think there are different ways of responding to different kinds of poetry and styles of presentation that evoke differing kinds of audience engagement and hence response. However, I accept that it might have been better to have allowed the audience responses to evolve naturally and to emerge as appropriate in response to such different genres and to the different cultures of performance, on the one hand, and of a more literary presentation on the other.  So I hold up my hand on that one.
Richard Wilcocks adds:
Lucy Newlyn, who is Professor of English Language and Literature, CUF Lecturer and Tutorial Fellow in the Faculty of English at the University of Oxford, wondered whether she had ever been taught in the room which is now the café in the HEART Centre, and which was once part of Bennett Road School, at which she had been a pupil. She had moved on to become a pupil at Lawnswood School in the days when it was still in the old buildings, now demolished, and was anxious to greet two present-day pupils - Fatima El Jack and Jasmine Joseph - who must have felt a little overwhelmed at the idea of so much creative talent originating in Headingley, with themselves as the current representatives of it.

Overwhelmed or not, they were brave and confident next to the high-flown guest poets: Jasmine delivered her lighthearted Potty Park and Fatima her Motherland (all learned by heart) effectively, receiving much applause and a few whoops as well. 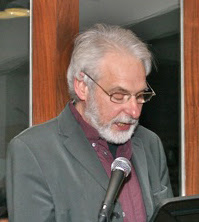 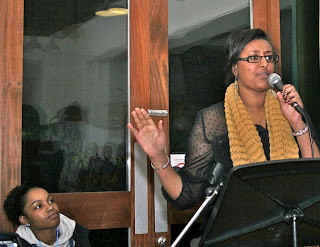 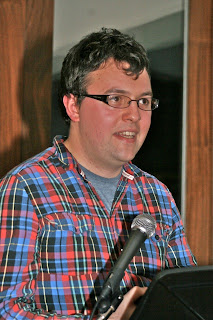 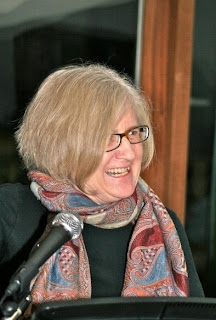 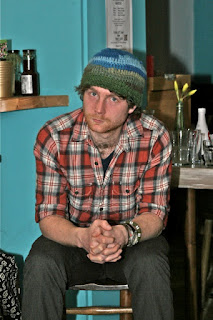